If dividend paying stocks are any indication, the U.S. stock market continued to experience respectable growth in July 2021. The following chart shows the market's dividend increases and decreases from January 2004 through July 2021: 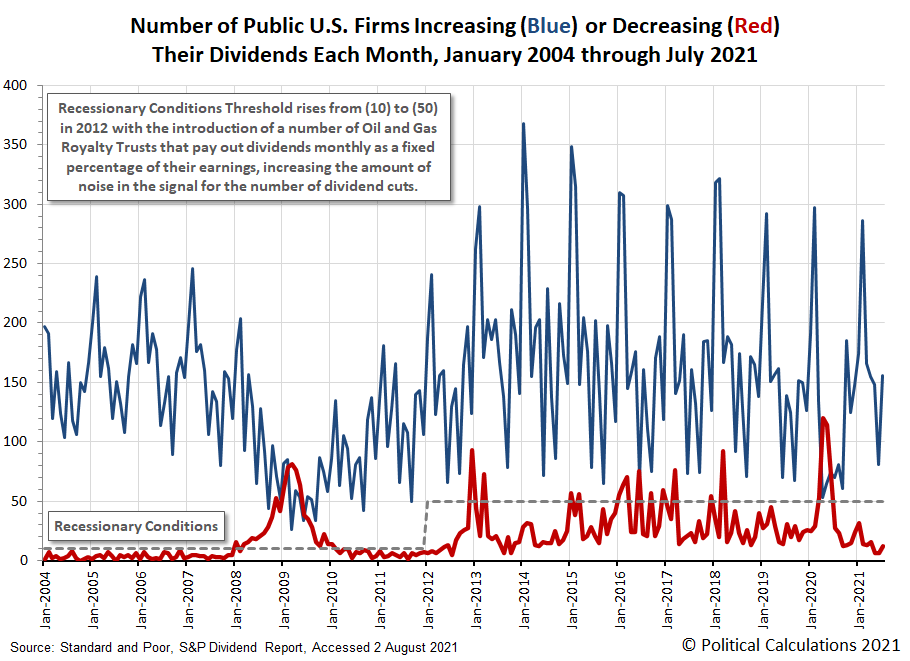 The dividend metadata for July 2021 is where the market's continued strength really shows its hand:

Since our June 2020 report, the National Bureau of Economic Research has declared the Coronavirus Recession that began after the U.S. economy peaked in February 2020 hit bottom and ended in April 2020.

That determination provides an opportunity to see how simply counting the number of U.S. firms either cutting or suspending their dividend payments to their shareholding owners works as a near real-time economic indicator. The next chart shows the combined total of dividend cuts and omissions in each month from January 2004 through July 2021. 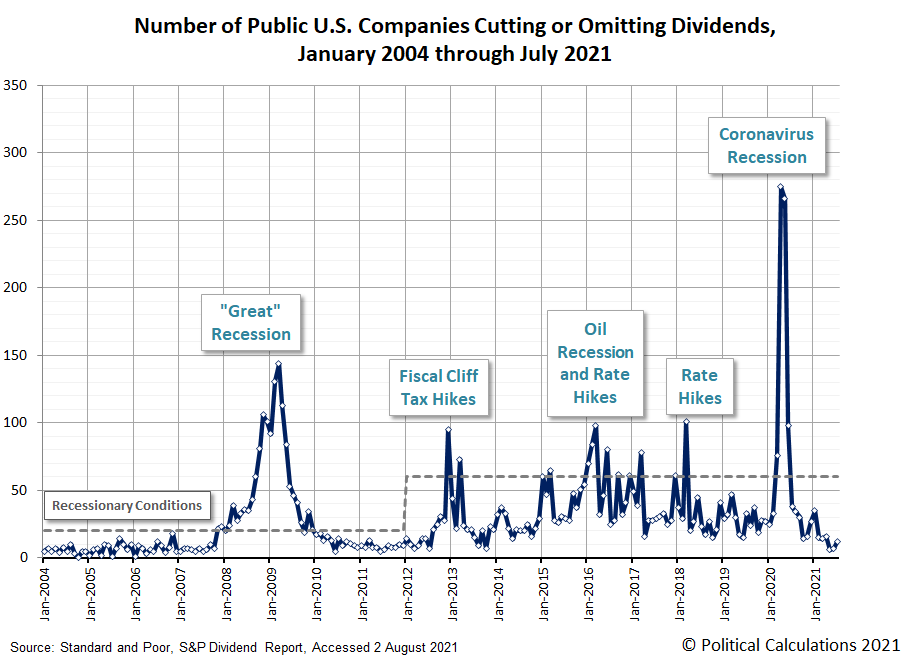 What we find is that aside from tax law change-driven anomalies that affects the timing of when shareholders might collect dividends, this combined figure is a good indicator to identify periods when recessionary conditions are present in the U.S. economy. As with the so-called "Great Recession" of 2008, the count of dividend cuts and omissions rising above a key threshold works well in picking up when recessionary conditions are negatively impacting the economy.

However, this indicator slightly lags the official end of recessions by up to several months in the time it takes to drop below the key thresholds, which is consistent with dividend cuts and omissions being a somewhat lagging indicator.

That's because there are two types of dividend payers. The first type includes firms who pay variable dividends, often as a percentage of their earnings, which are quick to respond to both deteriorating and improving economic conditions. Firms in this category account for the real time indication of the onset of recessionary conditions. We consider firms in this category to be proverbial canaries in the coal mine with respect to detecting the onset of recessionary conditions in the economy.

The second type includes firms who set their dividend payments independently of their earnings. Because these firms follow this practice, which requires the intervention of their boards of directors, they tend to be slow to respond to the deterioration in their business outlooks when recessionary conditions arrive. Consequently, their actions to either cut or suspend their dividends as their changing business situation dictates is delayed. That lagging effect also applies after recessionary conditions come to an end, with elevated numbers of firms still acting to cut their dividends for up to several months after economic conditions have begun improving.

Together, the two types of dividend paying firms makes the count of dividend cuts and omissions a solid near real-time indicator of the relative health of the U.S. economy, with the advantage of not requiring the additional months it often takes for the NBER to get around to making its official determinations.

The indicator is also good at picking up what might be called microrecessions, which we define as the presence of recessionary conditions that lack the scale, scope or severity to constitute a full-blown national recession as might be determined by the NBER. 2016's oil industry recession falls into that latter category, which could be easily seen in the number of firms within that industry cutting their dividends that year.

All in all, the monthly count of dividend cuts and omissions in the U.S. stock market may be the simplest economic indicator available to investors to quickly assess the relative health of the U.S. economy.