In December 2021, the typical discounted sale price Americans paid for an iconic can of Campbell's Condensed Tomato Soup was $0.98. Meanwhile, the rolling twelve month average for a 10.75 oz can dropped to $0.91 per can as the soup's November 2020 price spike dropped out of the trailing average math. The following chart tracks the recent price trends for Campbell's Tomato Soup from January 2000 through December 2021. 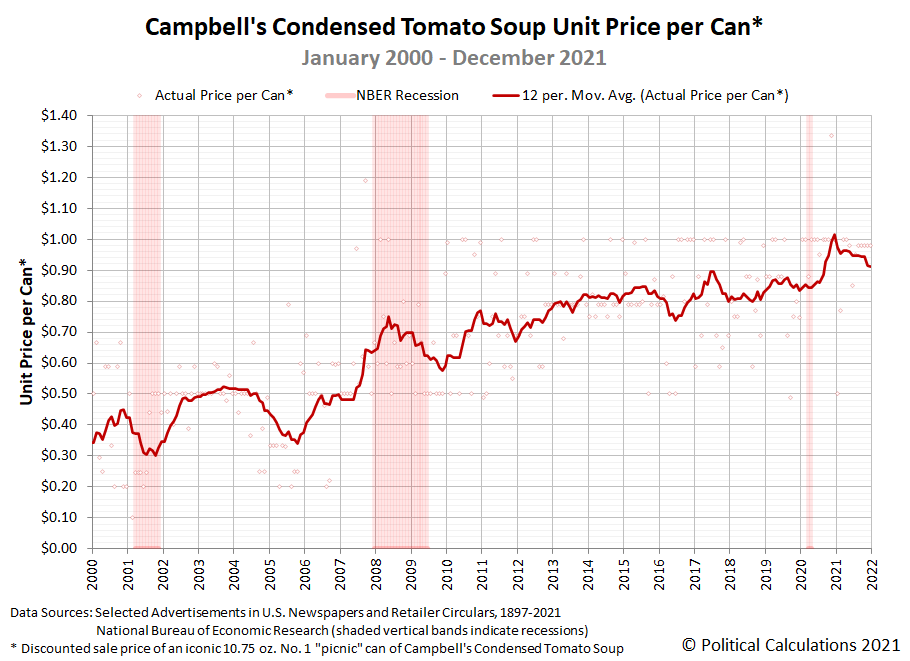 We should note the current dip in the trailing twelve month average of Campbell's Tomato Soup prices will dissipate over the next few months. That's because the unusually low discounting prompted by supply imbalances that peaked with the coronavirus pandemic in January 2021 will soon roll off the trailing twelve month average math as well. When it does, that average will quickly rise to at least $0.97 per can in the absence of deep discounting.

Or the average will rise higher, because we anticipate rising prices in 2022. On 8 December 2021, Campbell Soup (NYSE: CPB) CEO Mark Clouse confirmed the company would increase prices in response to their inflating costs.

The firm, which announced some price increases at the end of its last fiscal year, “recently communicated additional inflation-justified pricing actions,” Clouse said.

The latest increases, to take effect in January, are needed to offset higher costs for ingredients, packaging, shipping and labor, said Clouse.

Meanwhile, here's the summary of prices we surveyed at several retailers in December 2021 ranked from highest to lowest, along with the change in price at each since our previous snapshot: 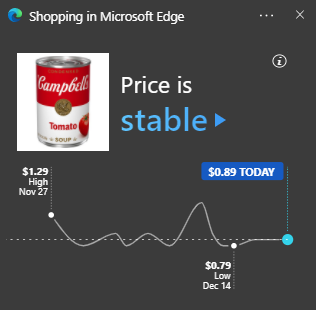 Of all these retailers, we've found Amazon's pricing to be the most volatile. The second chart provides an indication of just how volatile, based on snapshots at several points of time between 27 November 2021 and 19 December 2021.

While the latest snapshot puts Amazon's price at $0.89 per can, that pricing has ranged from a low of $0.79 per can to a high of $1.49 per can in this chart. Microsoft Edge's price history tracking feature calls the price stable because the current price is within 2% of the median price over this time, which coincidentally happens to be $0.89 per can. Amazon's average price for Campbell's Tomato Soup during this period was $0.96 per can according to this data.

We think Amazon represents a very small share of Campbell's Condensed Tomato Soup sales overall, where we give a higher weighting to more traditional retailers operating large numbers of stores in tracking the product's price trend.