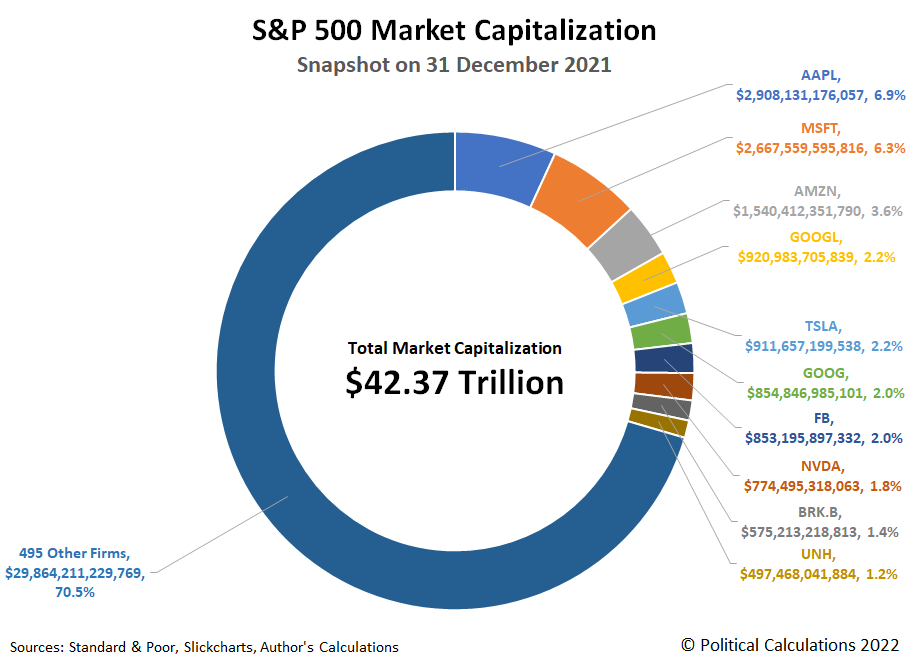 The top two firms, Apple and Microsoft, had market caps that were nearing $3 trillion each, with Apple briefly exceeding that value in early January 2022. If we combined the market cap for the two classes of Alphabet stocks, the firm formerly known as Google would have a market cap in excess of $1.8 trillion, which would rank third. Separately however, the individual Alphabet stocks rank fourth ($0.92 trillion) and sixth ($0.85 trillion) for their market cap in the S&P 500 index among the individual stock listings.

The undivided Amazon ranks third for individual stocks with a market cap of nearly $1.5 trillion. Tesla ranks fifth at $0.91 trillion, with its market cap squeezing in between the two classes of Alphabet shares. Facebook came in seventh at $0.85 trillion, graphics chipmaker Nvidia was eighth at $0.77 trillion, followed by re-insurer/conglomerate Berkshire Hathaway at $0.57 trillion.

Closing out the list, United Healthcare had a market cap of just under $0.50 trillion, edging out JP Morgan Chase (NYSE: JPM), which it replaced in the S&P 500's top 10 stocks since our August 2021 update.