The middle of summer marks the lowest point in Americans' consumption of Campbell's Condensed Tomato Soup throughout the year. With higher levels of soup sales coming with the arrival of fall and winter ahead, the following portion of Yahoo! Finance's 17 June 2022 interview with Campbell Soup (NYSE: CPB) CEO Mark Clouse shortly after the company reported its third quarter's fiscal results caught our attention.

BRIAN SOZZI: Did I hear this right on the call, you are now looking at a third wave of price increases?

MARK CLOUSE: Yes, it's true. So we're through two waves that are in market already. We announced the third wave in April and have been working closely with our retail partners on that. We want to make sure we're using the full tool bag to try to address costs. So it's not all about pricing. I think it's very important and we remain very mindful of protecting value for consumers.

And so things like productivity are really important. And I think perhaps the thing I'm most excited about in the third quarter was the response of our supply chain and the continued improvement in our execution and performance. Because that gives us a platform to continue to work on productivity and identify ways that we can drive savings so that we're not entirely dependent on pricing. And I think that balance is something that going forward, although we're expecting to see headwinds as far as inflation, I think we'll be able to utilize a variety of different levers to address it.

The following chart shows how the price of an iconic No. 1 can of Campbell's Condensed Tomato Soup has evolved from January 2000 through July 2022. It reveals the trailing twelve month average cost per can has recently exceeded the $1.10 per can level. This measure is heading toward the $1.25 level which is where we're recording the typical sale price of a can from Campbell Soup's second wave of price increases. 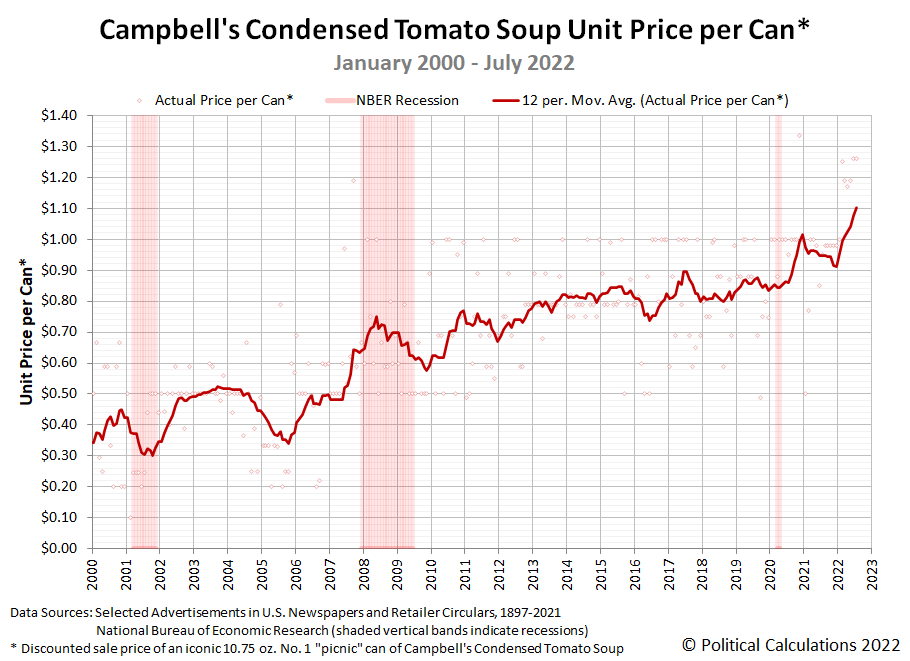 That second wave of price increases isn't quite over yet. Since our previous snapshot, tomato soup prices have continued to increase:

Walmart and Food Lion both increased their shelf sale price for a 10.75 ounce can of Campbell's Condensed Tomato Soup up to the $1.25-$1.26 range since our last update, joining Kroger at that level. Only Amazon among the 10 retailers whose sale prices we regularly track has not yet escalated its price from $0.99 per can. How long Amazon might sustain that now deeply discounted sale price remains to be seen.

To put today's inflation in context, before 2022, it was exceptionally rare to ever see prices for Campbell's Condensed Tomato Soup above $1.00 per can. As President Biden's inflation continues, it has become rare to find cans of Campbell's second-best selling soup for sale below that level.

Campbell Soup's CEO isn't the only one anticipating a third wave of inflation. So is Pimco's Mohamed El-Erian, who tweeted he sees a new wave developing if the Fed doesn't 'get its act together':

“Looking forward, inflation will come down over the next couple of months. That’s the good news,” El-Erian said on Wednesday.

However, the expert noted that a “third wave of inflationary pressures”—the underlying causes of inflation—is building, and “will be unleashed if the Fed doesn’t get its act together quickly.”

“With the first best policy option now long gone due to the first two stages of the ongoing Fed policy mistake, the recession risks are increasing accordingly,” El-Erian said.

El-Erian also thinks much of President Biden's inflation could have been avoided.