Two years ago, it was rare to find Campbell's Tomato Soup selling anywhere for more than $1.00 per can. That was true for much of 2021 as well.

But 2022 has seen the price of a Number 1 can of America's second-most popular and among the longest-selling condensed soups escalate because of President Biden's stimulus-fueled inflation. The rate at which its cost to consumers is rising is on par with the fastest pace of price escalations it has experienced in its almost 125 year history. Prices today, as measured by the trailing twelve month average cost of a 10.75 ounce can of Campbell's Condensed Tomato Soup, are rising about as fast as they did after President Nixon's price controls on food were lifted in April 1974. It's also similar to post-recession periods where tomato soup prices rapidly recovered to their pre-recession levels. 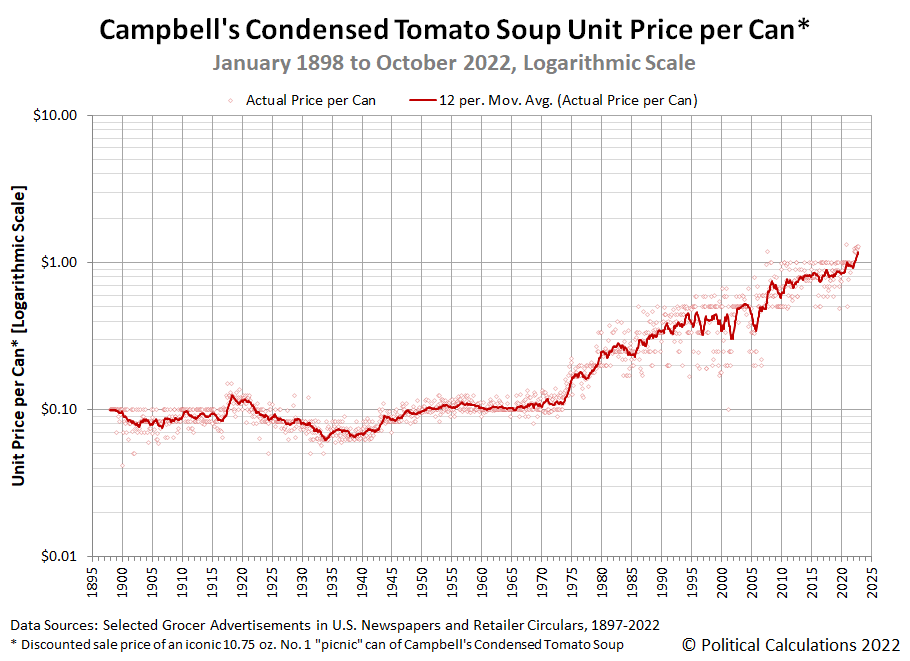 The historic prices on this chart are shown in logarithmic scale, where straight line changes represent exponential growth in prices and the steeper the line, the faster the cost growth. The only times the trailing year average cost of Campbell's Tomato Soup has risen faster came following recent periods of recession, when prices recovered rapidly to pre-recession levels as the demand for tomato soup crashed and recovered.

The next chart switches to linear scale to focus on the period since January 2000. Through October 2022, the trailing year average for the unit cost of Campbell's Condensed Tomato Soup has risen to $1.18 per can. 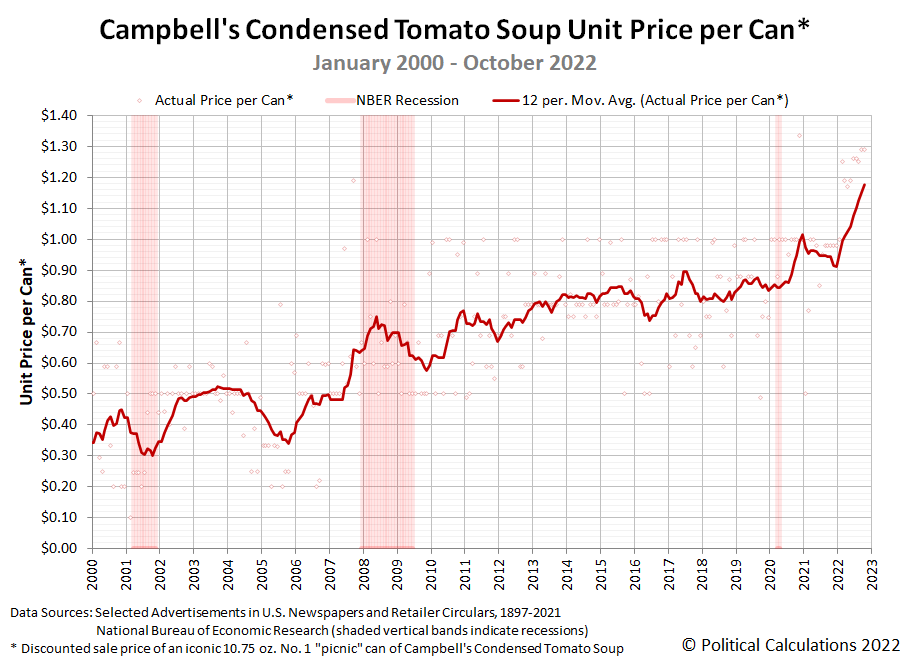 Here are prices of Campbell's Tomato Soup at the ten major grocery-selling retailers we use to track the typical price American consumers pay for an iconic can of the long-selling product. This latest price data confirms its price to consumers is converging toward a level of $1.25-$1.30 per can as soup season gets underway in the United States.

Two years ago, a price of $1.00 was the most you'd ever pay for Campbell's Condensed Tomato Soup. Today, that's near the lowest price you'll see it discounted to when grocers put it on sale.

If you want to explore the price history of an iconic can of Campbell's condensed tomato soup further than the start of the 21st Century, we've compiled it going all the way back to January 1898! Aside from the logarithmic scale chart featured in this article, we most recently featured its price history in January 2022:

This article provides links to our older coverage, but if you want to catch up with our newer analysis, follow this link!