The seeming-to-be-ever-growing size of the U.S. National Debt was in the news just a little over a month ago, as it has been estimated to have just recently passed the $8.0 trillion USD mark (back on October 18, 2005). We here at Political Calculations thought it might be fun to look at the national debt through the last 105 years, so we can compare it to the United States’ national income (as measured by nominal GDP, which has recently crossed the $12.5 trillion USD mark). The following chart shows both figures through the years, with the black line representing U.S. nominal GDP and the red line representing the United States’ national debt: 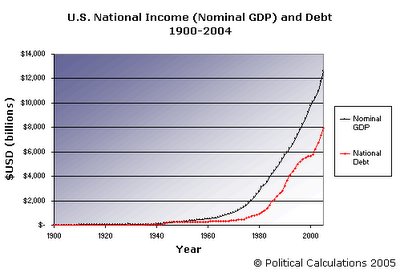