Political Calculations has previously looked at the level of the U.S. National Debt and compared it to the U.S.' National Income (as measured by nominal GDP), but not being mega-billionaires (yet), we'd like to break the numbers down into more personal terms. So, we’ve taken the data for the United States’ national income and national debt for the last 105 years and divided each figure by the estimated U.S. total population (from U.S. Census figures) for each year to come up with the per capita numbers presented in the chart below: 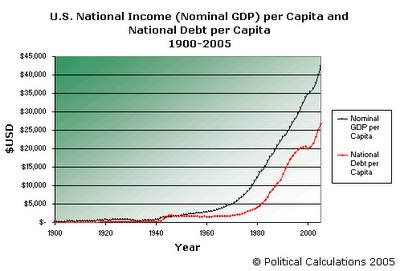 For more information about where the numbers in the chart came from, see the following posts, which contain links to the original data sources: