Recently, Political Calculations introduced a new tool, inspired by some simple math put forward by Harvard economist Greg Mankiw, that provides a means for determining what level the Federal Reserve should set the rate it charges banks for overnight borrowing. Mankiw's method is attractive in that it incorporates two of the economic factors that the Fed is chartered to influence through monetary policy: the rate of inflation (measured as 12-month change in the Consumer Price Index for Urban consumers, less food and energy) and the rate of unemployment.

What we didn't do however was show how well Mankiw's math works over time. The following chart goes back some 10 years, to January 1996, and compares the actual Federal Funds Rate set by the Federal Reserve with the level that would have been set using Mankiw's method: 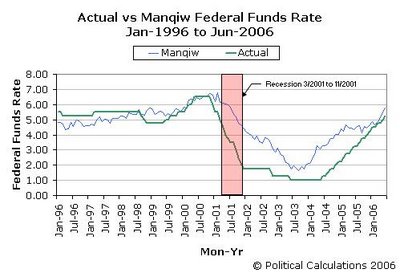 Overall, Mankiw's method for setting the Federal Funds Rate seems to work well, as it generally tracks the actual moves of the Federal Reserve, but with some important factors to consider in use, which we'll discuss below:

The Problem with Mankiw's Method

Mankiw's method has one main drawback - it is backward-looking since it relies on statistics generated by federal government agencies covering the time period from when the data was last reported. Looking at the chart above, this factor may be seen in the lag between when the Federal Funds Rate would have begun being reduced using Mankiw's method compared to when the Federal Reserve actually did begin reducing this rate ahead of the 2001 recession. This lag also suggests that the Fed incorporates one or more forward-looking components into its considerations when setting the Federal Funds Rate, since it clearly anticipated the U.S.' weakening economic conditions ahead of the "official" start of the recession.

Consider the difference between the Federal Funds Rate that would be set by Mankiw's method over the period between November 2000 and March 2006 and the actual level set by the Federal Reserve. During this prolonged period of time, the Fed pumped an extraordinary amount of liquidity into the U.S. economy, first to combat the recession at the beginning of the period, then to stimulate the economy following the shock of the terrorist attacks of September 11, 2001.

Mankiw's method, by contrast, was nowhere near as aggressive over this period. But, beginning in September 2003, the Federal Funds Rate that would be set by Mankiw began increasing, well ahead of when the Fed began its long series of quarter-point increases in the rate in June 2004. Had the Fed more closely paced the Federal Funds Rate to what Mankiw's method had indicated, the U.S. economy might have avoided the significant increase in inflation that became clearly evident this year.

What's Next for the Fed?

Going by Mankiw's method with the June data for inflation and unemployment, the Federal Funds Rate would be set at 5.83%. This would suggest that at least one more .25% increase may be in the works for the upcoming August 8 meeting of the Fed's Open Market Committee, as inflation will continue to play a significant part in its considerations.

However, the Fed must now also consider the effect increasing its Federal Funds Rate will have in potentially triggering a recession. Using Political Calculations' recession odds prediction tool, upping the Federal Funds Rate to 5.50% with today's spread in U.S. Treasury yield rates gives the odds of recession occurring in the next 12 months of 39%. At a FFR of 5.50%, the U.S. Treasury yield curve would need to invert by just 0.32% (with the 3-month treasury higher than the 10-year treasury) to raise the odds of recession to 50%.

Should the Fed choose to take no action, as current Fed funds futures contracts would seem to suggest, leaving the FFR at the current 5.25% level would place the probability of a recession occurring in the next 12 months at 36%.

Then again, some of the rumors may be true and the Fed may actually reduce the Federal Funds Rate. With the current U.S. Treasury yield spread, a .25% decrease in the FFR would lower the risk of recession to 32%, keeping reasonably consistent with where the recession risk probability has been for the last four rate hikes.

Regardless of all this speculation, we should find out what the Fed really cares about on August 8....