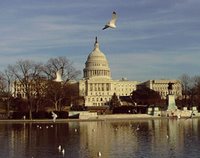 Occasionally, we get around to living up to our name here at Political Calculations, which we hope explains our latest project!

In a nutshell, we've decided to convert Election Projection's formulas for projecting 2006's U.S. Senate races into our newest tool!. (HT: The Blogging Caesar for developing and posting the math!)

Now, instead of having to rely on "professional" prognosticators, you too can project who will be the winners of 2006's statewide elections, just like the "pros!" You can even play "what if" games to your heart's content - you just need to enter the indicated data into the tool below:

State: There's something to be said for how the last presidential election went for the state in question. For this tool, that means you would need to find out the margin by which either Bush beat Kerry or Kerry beat Bush in the state to provide a general sense of the inherent political leanings of the state's voters. Rather than have you look it up and do the math yourself, we built the winning candidate margin for each state into the tool!

You'll note that we've listed all 50 states and not just the ones with U.S. Senate elections - that's because the same formulas work for any statewide race (our built-in bonus for you!)

In the U.S., incumbency matters. Incumbents not only have an edge going into every election they enter, they can even transfer some of their vote-getting power to members of their party in the case of an open election in which they are not running. This section is where we capture the power of incumbency in an election.

Incumbent Net Job Approval Rating: If a statewide incumbent candidate has a positive net approval rating, the odds are good that they, or the candidate of their party, will win the election.

Incumbent Political Party: There's something else about elections in the U.S. that we didn't mention already - there are only two political parties that matter. It's rare to find a three-way (or four-way, or five-way, etc.) race where there are more than two serious candidates, which is why there's only two choices to select from here. Select the party of the incumbent that best fits the affiliations of the two major candidates in the race (we'd be less vague, but there's that whole Lieberman vs. Lamont thing in Connecticut.)

State Polling Bias: This is an arbitrary adjustment for which you'll need to use your best judgment. First, you need to indicate whether or not statewide polls in the state in question skews in the direction of the incumbent's political party. Next, you'll need to estimate by how much those polls skew the results (in other words, how far off are the polls from the results of actual elections?)

A good example is New Jersey, where polls typically indicate 0.5% more support for Republican candidates than actually shows up in election results. For the state's 2006 senate election, you would indicate that the polls do not favor the incumbent party (Democrat) and you would enter 0.5 to show the amount of state polling bias.

Here's where we get into who's actually running! Again, to keep the amount of data entry that you have to do managable, we focus upon the data for the party of the current incumbent in the office.

Name of the Incumbent Party Candidate: Enter the name that will appear on voter's ballots or your own cute concoction! This will be used in text that you can copy and paste elsewhere....

The Most Current Average of Polling Results: For our money, there's no better source for this data than Real Clear Politics, whose polling results and averages for U.S. Senate races is just what the doctor ordered for this tool!

Name of the Opposing Party Candidate: Just like the name you entered for the Incumbent Party Candidate, enter the name that will appear on voter's ballots or your own editorial creation! This bit of information will be used in text that is provided in the results below, which you may copy and paste elsewhere.

And that's it - here's where you can enter all the data and find the margin by which one candidate is projected to defeat the other!:

For no other reason than we can, let's pick on New Jersey again. Here, the incumbent senator, Robert Menendez (D) is running for re-election against opposing party candidate Thomas Kean (R). Incumbent Robert Menendez currently (September 12, 2006) has the following numbers:

Net Approval Ranking: -1% (SurveyUSA)
Incumbent Party: Democrat
Do statewide polls favor the incumbent's political party?: No
How much are the polls off? 0.5%

We get the following projection:

Thomas Kean is projected to edge Robert Menendez by a margin of 1.16%.

The other races are up to you - go to it, poll junkies!