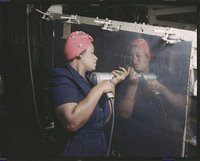 Then, we went to a December 2006 report from the Congressional Budget Office that provided hourly wage data by percentile. For example, we learned from this document that 10% of hourly wage earners make $7.44 or less, 20% make $9.07 or less, and that 90% make $33.45 or less! What's more, we found out that the median wage earned by hourly wage earners is $14.82.

So, what can we do with these figures? Well, if we take all the values we found related to the distribution of hourly wages paid in the U.S., we can use ZunZun's online curve-fitting application to create a curve to fit our available data, and use that formula to estimate how many people there between any two given hourly wages!

So that's what we did! We recognized the basic data as having an "S" shape, so we opted to model the data using a Gompertz type distribution. Our modeled curve is below (x represents wages per hour and y represents the percentage of the hourly work force): 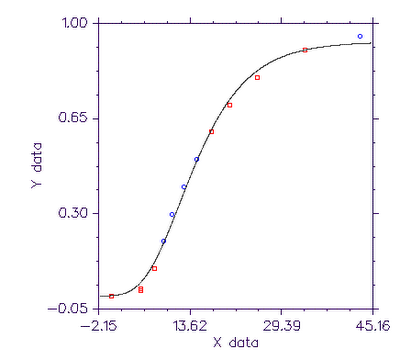 As you can see, the curve is pretty darn accurate for values between the 10% and 90% percentiles (on the y-axis), and generally reflects the trend revealed by our selected data points. Math fans will recognize that the basic formula for this kind of curve is:

ZunZun provided the values for a (0.93185), b (1.88835) and c (0.15855) in the equation above while e is a mathematical constant. Now, the curve shown above reveals this formula will seriously overestimate the number of workers at the low end of the scale and will underestimate the number of workers at the high end. Because it's of special interest right now, we've created a special formula for handling the low end of the scale, between 0 and 15% of the hourly wage workforce, that covers the range of workers for whom the new minimum wage increase proposals would affect. The formula we've used to represent the distribution of wage earners in this range is:

Now, for the sake of comparing the results of the estimated hourly wage earner distribution tool above and actual data, here are some select values of the actual distribution at the low end of the scale:

The tool doesn't perfectly match the known hourly wage earner distribution for 2005, but should be good enough to provide data for use in other calculations!