Have you ever noticed that some things are made out to be a lot harder than they have to be? Consider how the U.S. Census goes about determining where to set the level of the threshold of poverty for individuals and families each year:

Seems like quite a lot goes into it, doesn't it? And it probably was when the levels were first set back in the 1960s. Since at least 1980 however, setting the U.S. poverty threshold each year would appear to be a piece of cake. First, here's our chart showing the poverty threshold for each year since 1980 for single individuals with either 0, 1 or 2 children: 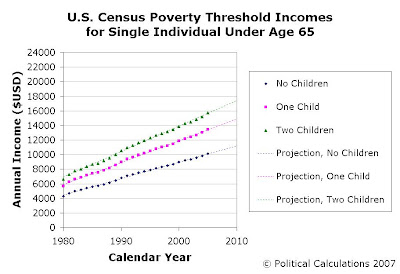 That's not your imagination. All the data points basically sit on a straight line. Now, let's see the poverty threshold for each year since 1980 for married couples with either 0, 1 or 2 children: 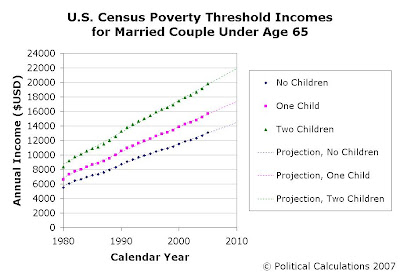 Once again, all the data points hover around a straight line running through them!

The nice thing about these trends is that we now have an almost supernatural power to be able to determine almost exactly where the poverty threshold will be set years into the future! Our latest tool does the math - all you need to do is select the year of interest, marital status, and number of children:

What else can we say? We didn't expect it to be that easy either!

Update 26 August 2007: Well, what if it turned out to be even easier that what we thought? We recently realized that we had posted a working draft version of the user interface for our tool, which we used to confirm our math, rather than the much more user-friendly product you now see above!