Last week, we introduced our findings of the worst case performance of the S&P 500 adjusted for inflation for investments made in the index ranging from 1 to 50 years in length. This week, we're looking at the brighter side of the U.S. stock market in looking at the best case performance for the index for investments of the same lengths of time! Here's the chart (click to enlarge): 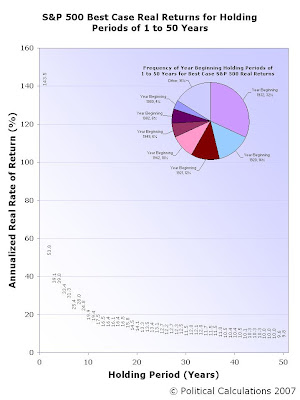 The chart above shows our basic findings of the best-case inflation-adjusted performance of the S&P 500 for all holding periods of 1 to 50 years, defining each unique period as beginning in each month starting from January 1871 and going all the way through to December 2006. The annualized rates of return shown in the chart have been adjusted for inflation and assume that dividends are fully reinvested. No taxes or trading commissions and fees are taken into account for these results.

A key point of interest is the investing holding period of 45 years, which spans the typical length of an individual's career (assuming starting at age 20 and working until age 65). Here, the best case annualized rate of return for an investment of this length is 10.3% after adjusting for inflation. By contrast, the worst case historical performance of the S&P 500 for a holding period of 45 years is 3.6% after inflation.

Although we don't show it in the chart above, as more time passes, the best-case performance for an investment in the index continues to gradually decrease, eventually reaching a range between 7.4% and 7.8% for holding periods running between 100 and 130 years in length.

Unlike our previous look at the worst case real returns for the S&P 500, the best case performance for investments made in the index are largely defined by the year in which they begin, instead of when they end.

If nothing else, this observation does suggest a unique stock investing strategy. Should the market ever break its records for worst case real return performance, that may be a really good signal that it's a really good time to go "all-in"!