Mostly for the sake of presenting the nominal (non-inflation adjusted) income data we have for 1995, we're going to offer a look at two other area strata charts for that year. The first chart provides an estimate of the distribution of total income earned in 1994, which we approximated by taking the midpoint of our income ranges and multiplying it by the number of people within the indicated income ranges for that year: 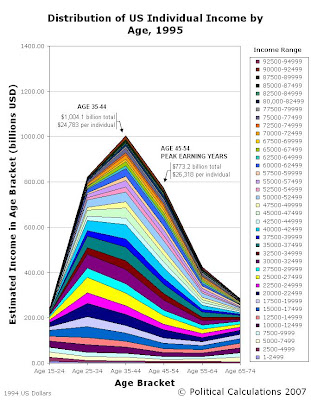 The chart provides a measure of the relative economic clout of each age group in 1994. Here, we see pretty much what we would expect - the Age 15-24 group has the lowest collective income, as large numbers of people within this group only work part time, are actively engaged in their schooling (both high school and/or college), or don't earn much income given their low levels of experience and training.

The next lowest group on the economic clout scale is in the Age 65-74 bracket. Here, the wide majority of individual in this group is retired.

By far, the group with the greatest collective economic impact is the Age 35-44 cohort, who altogether aggregated over $1 trillion (in 1994 US dollars.) But, as we saw in the data for 2004, it's the Age 45-54 period where individuals rake in the most money per person! Even though this age group only accounts for just over 77% of the income accumulated by those in the Age 35-44 bracket, they take home an average $26,318 per capita, compared to the average $24,783 for the 35-44 year olds (again, these figures are 1994 US dollars!)

We can see the reason why this occurs in the chart's income level strata - within the 45-54 age group, a higher proportion of individuals earn higher incomes than those in the 35-44 age group, as the income bands are proportionately wider at these income levels.

We can confirm this using our next chart, which reveals the relative percentages of individuals by age group for each of the income ranges: 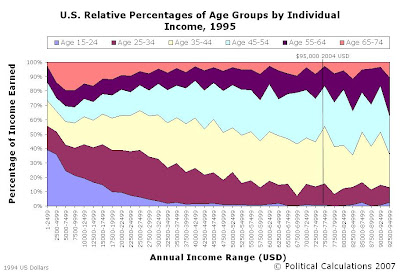 Here, as we saw in similar 2004 data, we see that as income increases, the proportion of people in the older age groups also increases.