Now that we've looked at the distribution of individual incomes by age in the U.S. for 2005, we can now identify the period of a typical U.S. individual's life where they are able to earn the greatest income.

The way we've gone about finding this out is to take the midpoint for each of the income ranges we've considered and multiply it by the number of Americans in each of the age brackets. Doing so will give us a good estimate of the total amount of income being earned by the individuals in each age range. The chart below shows our results: 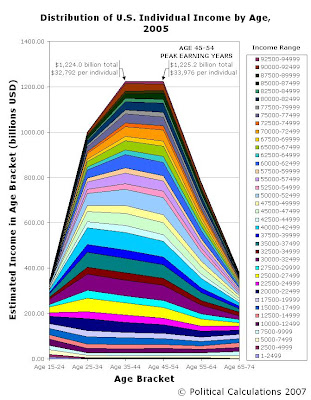 One of the cool things about the chart is that it shows the shifts from lower to higher income for the various age ranges. Comparing the various widths of the income strata shows that the number of low income earners decreases with age, as the low income bands grow narrower as age increases, while the number of high income earners increases with age, as these bands grow wider.

The table below provides the comparative data for each of the age groups:

Why, it's almost enough to make you look forward to middle age!