Political Calculations
Unexpectedly Intriguing!
11 July 2007
The Declines of the Times

Since we mentioned the New York Times yesterday, we thought it might be time to look again at the business health of the nation's "most influential" newspaper. A year ago, we looked at the circulation figures the New York Times presented in their annual reports to the Security and Exchange Commission going all the way back to 1993. So now, a year later, we're doing the same to see how the Gray Lady has fared.

It's not pretty. First, here's the New York Times' weekday (Monday through Friday) circulation figures from 1993 through 2006: 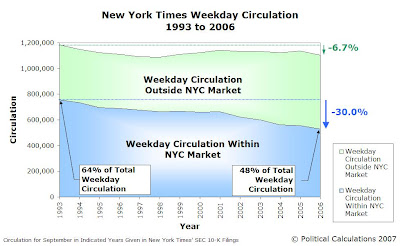 The following table provides the year-by-year weekday circulation data provided by the New York Times in their annual filings with the SEC:

The data also confirms that the first drop in the newspaper's national year-over-year circulation figures since its management began focusing on a national publication strategy in 1998, as this figure declined by 0.94%.

But what about the Sunday edition of the New York Times? How has it fared over this period?

Would you believe worse? The following chart illustates the decline of the New York Times' Sunday edition: 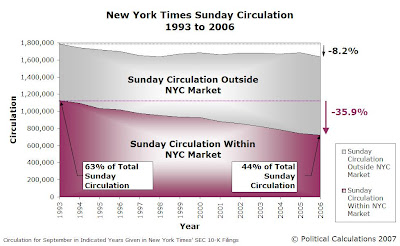 We find that the New York Times' circulation in its home market has steadily dropped to a figure 35.9% below its peak value in 1993. Meanwhile, when we add the newspaper's national circulation to the totals in 2006, we find that it has declined by 8.2% since 1993's peak.

The table below provides the year-by-year circulation figures for the New York Times' Sunday edition:

Again, we find that 2006 marked the first year in which the Times' circulation outside the NYC market, fell from the previous year since the newspaper's management began focusing on growing its national circulation in 1998. The year over year drop from 2005 to 2006 represents a 2.8% decrease in the Sunday edition's circulation.

We wonder if these declines in the output of the New York Times in 2006 might account for the perception of its reporter, David Leonhardt ($$$), that the entire U.S. manufacturing sector is in recession, despite all evidence to the contrary since he made his statement in February 2007. (HT: Tom Blumer)

In any case, the substantial declines of both the weekday editions and the Sunday edition of the newspaper suggest, combined with recent changes by the newspaper's management that will likely accelerate these trends, means that the New York Times is running out of time and thus, the Gray Lady is fading into the twilight of its existence. At very least, as we have known it.