Every six weeks, the members of the Federal Open Market Committee of the Federal Reserve, the most powerful central bank in the world, gather together in a dark corner of a discreet office building in Washington D.C. with a dark purpose: to sacrifice a goat so that they might read its entrails to divine where they might next set the level of the Federal Funds Rate.

You'll have to excuse our prose - with Halloween just a day away, we find that we're really getting into the spirit of the season this year!

More seriously, the FOMC has begun meeting today and will, when the meeting concludes tomorrow afternoon, release a statement in which they'll announce whether they will raise the target for the nation's base interest rate, lower it, or keep it the same as where it is today.

In doing that bit of business, they'll consider the condition of the U.S. economy in general and the state of inflation and the rate of unemployment in the U.S. in particular. Previously, we've developed a tool based upon a 2001 paper by Greg Mankiw for predicting where the Fed will set the Federal Funds Rate, which incorporates these factors into its calculations. The following chart illustrates where the Fed might have set the FFR using Mankiw's version of a Taylor Rule compared to where they actually did from January 1996 through September 2007: 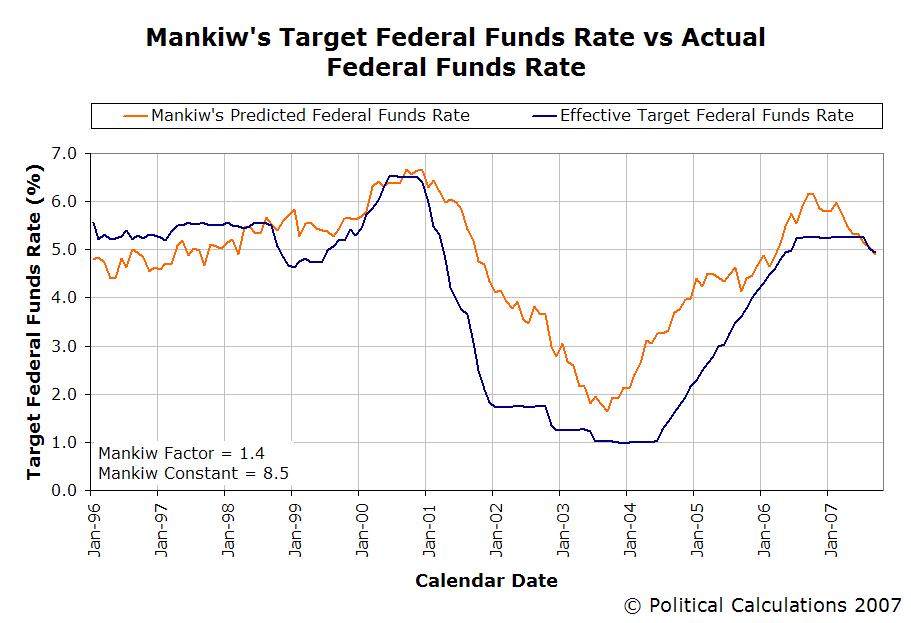 Going by this chart, we would anticipate that the Fed would leave the Federal Funds Rate unchanged, as it appears that the FFR is pretty much in sync with where Mankiw's method would put it today (the target FFR is currently 4.75%, but the effective FFR is 4.96 which is exactly where Mankiw's method would place it - this suggests no change will be made.) However, this chart also illustrates a potential problem with using this method, particularly since 1999, as it would seem to consistently overstate where the Fed has actually set the Federal Funds Rate.

The problem with Mankiw's method is that it is based upon what the Fed did in setting the Federal Funds Rate (FFR) back in the 1990's when it maintained a much tighter monetary policy than it has in recent years. However, beginning with the 1999 run up to the perceived problems that might be encountered in the Year 2000 (anybody remember the whole Y2K thing?), the Fed has maintained a looser monetary policy.

We noticed this several weeks ago when we revisited the data. So, we started playing with the numbers built into Mankiw's model to see if we could adjust for this change. The following chart shows what we got when changing what we're calling the Mankiw factor from 1.4 to 1.6: 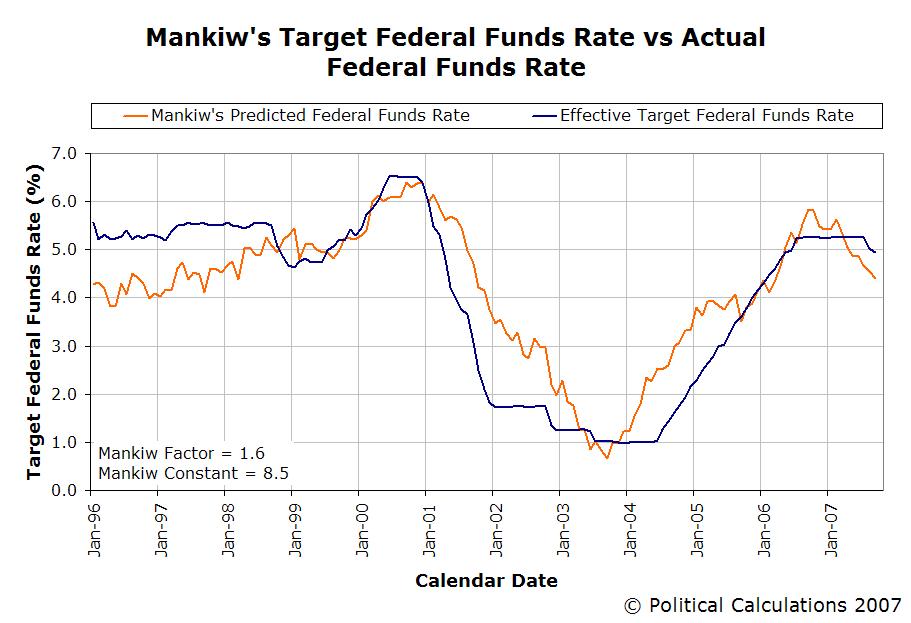 Making this adjustment, we find that the method would have anticipated the Fed's previous rate cut to the current 4.75% target and that it would anticipate a further 0.25% reduction based upon inflation and unemployment rate data through September (the adjusted target rate would be 4.40%, but the Fed tends to move in quarter point increments.)

So, that's what we anticipate will happen. Of course, this modified method is of no use to anybody if they can't run the numbers themselves, so we've reworked our tool to allow you to adjust all the parameters as you see fit! As before, you'll need to find the year-over-year change in the following inflation and unemployment data, as we've listed below:

and you can also now adjust the Mankiw factor to help account for the relative tightness or looseness of the FOMC's monetary policy, as well as what we're calling the Mankiw constant, which would be the combined fixed rates of unemployment and inflation against which the FOMC would appear to be adjusting their targets.

And there you have it. Now, you too have pretty much the same absolute power over setting monetary policy as Fed Chairman Ben Bernanke!

Update: Edited for greater clarity and better grammar. We might be in getting into the spirit of the season, but that hasn't diminished our need for coffee....

And while we're at it, we've also modified the tool to take the raw CPI data as a direct input, rather than making you find the year-over-year percentage change, just in case you're not like us and don't compute things like that in your heads....

Update 25 May 2012 Added the "looking at our tool's results...." paragraph immediately below the tool.