Who knew the economy was growing so well? Today's advance GDP data released by the Bureau of Economic Analysis for the third quarter of 2007 came in substantially ahead of where forecasts, which had ranged from 2.5 to 3.4% annualized growth, would have placed it! We've updated our GDP bullet charts, which put the advance estimates for 2007Q3 into historical context: 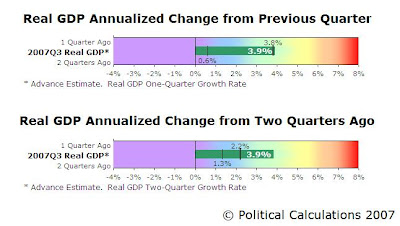 At the upper end of the green zone, which corresponds to really nice economic growth, today's 3.9% annualized growth figure (Real GDP = 11,630.7 billion USD) surprised us as we had only forecast economic growth in 2007Q3 to come in at 3.0% (Real GDP = 11,583.3 billion USD). Our method however is used to forecast where the final revision of GDP in each quarter though, so we anticipate that the BEA's figure will be revised downward from today's advance estimate when the final revision is released in two months.

Never the less, we certainly would like to be pleasantly disappointed with our forecast!