Political Calculations
Unexpectedly Intriguing!
December 11, 2007
The Fed's Crystal Ball: A Quarter or a Half?

Today, the Federal Reserve will either cut the Federal Funds Rate (FFR) by 0.25% or they will cut it by 0.50%. In making this decision, they'll be using forward looking data that we might use to reverse engineer where the Fed believes the U.S. economy might be heading in the very near future.

Last month, we modified our tool for anticipating where the Federal Reserve might next set the FFR using the two aspects of economic activity that the Fed has been tasked to balance: inflation and employment. The key measures our tool uses are inflation, as measured by the Consumer Price Index, Less Food and Energy and employment, as measured by the headline rate of unemployment.

The following charts illustrate the likely scenarios we see. Our first chart considers the possibility that November 2007 will come in at the same level as October 2007, with CPI less food and energy coming in at 2.17% and the rate of unemployment at 4.7%: 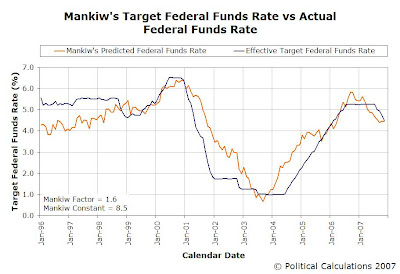 This chart suggests that the Fed is right on target with where it has set the Federal Funds Rate at 4.5%. The next chart considers the possibility that the rate of inflation will come in a tenth of a point lower, at 2.07%, with the unemployment rate unchanged at 4.7%: 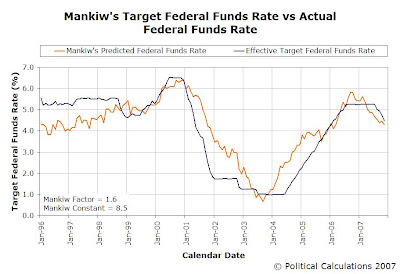 With a predicted FFR of 4.29%, this scenario supports a quarter-percent cut and suggests that the Federal Reserve anticipates a lower rate of inflation ahead. Our third chart considers inflation less food and energy dropping to 2.07% as in the previous scenario, but with a 0.1% increase in the U.S. unemployment rate to 4.8%: 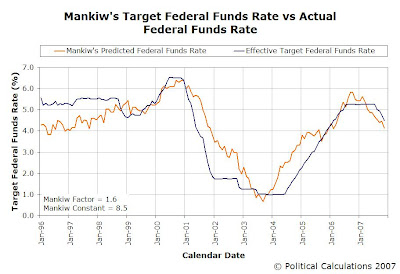 Coming in with a predicted FFR of 4.13, this scenario would be the most likely should the Fed choose to cut rates by 0.5% today. To get to the same place by just tweaking the inflation number, CPI less food and energy would need to drop by 0.2% to 1.97% from October 2007's level, which is not likely given historic factors (over the past ten years, the month of November features either the highest or second highest rate of inflation for the calendar year.)

These are just our possible scenarios - if you have you're own, you're more than welcome to get in on the fun!

And there you have it - a glimpse of what's in the Fed's crystal ball!

Update: The Fed only cut the Federal Funds Rate target to 4.25%, which suggests to us that unemployment will hold fairly steady, while the rate of inflation in the U.S. has slightly decreased, coinciding with a slowing economy. We'll have our confirmation soon as the Bureau of Labor Statistics is due to release the latest inflation figures on December 14th!