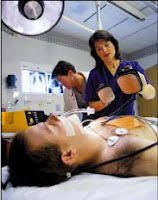 Now that we've taken on a Nobel-prize winner's take on what should be in an economic stimulus package, and double-underlined why government-legislated economic stimulus packages are always too late to be genuinely effective, we thought we might consider what should be on the Congress' list of things to do for the next time when the economy takes a turn for the worse.

In fact, we'll do more than that. We'll also tell you what might keep the handful of things we're about to suggest from working! Did Joseph Stiglitz do that for you? Heck no! We do economics with two hands around here, the way it's meant to be done, so you don't have to go trolling for those fancy journal peer reviews or snarky critiques on anonymously written blogs. Or maybe at least on other anonymously written blogs!

The last point regarding the politically sensitive reporting of the number of business closings is similar to how politicians and bureaucrats in countries with universal health care programs champion the high utilization rates and "efficiency" with which certain medical procedures are performed. In reality, this situation represents the illusion of efficiency since these apparently high rates really only exist because the health care system has a major shortage of people or equipment needed to perform these procedures and is actually incapable of meeting the nation's true health care needs. See: Cuba, Canada, United Kingdom, etc....