We base this prediction upon data recently provided by the New York Times Company in its annual report, which it released earlier this year. Combined with circulation data provided by the Grey Lady's parent company in its previous Securites and Exchange Commission financial data filings, we've updated our charts showing the trend in the New York Times' weekday circulation since it peaked in 1993: 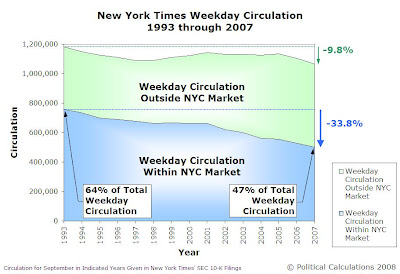 The table below provides the circulation numbers that we used to create the chart above, both nationally and within the newspaper's home region. Clicking the "Year" links provides the relevant NYT's SEC filing for the indicated year, from which we obtained the newspaper's circulation data, which is reported in the section of the annual report in which the company's management discusses its business:

The New York Times had staved off a greater circulation decline through its strategy of moving to become a national newspaper in the late 1990s. However, this national strategy has not been successful in holding off the newspaper's decline in total circulation since 2001. More importantly, between 2006 and 2007, the New York Times' circulation decline has accelerated, which is evident in the steeper downward slope in the chart.

In fact, the NYT management's strategy may well have also accelerated the newspaper's circulation decline in its home market, which is evident in the steeper decline seen in the chart above, as the publishers and editors (the newspaper's management) have effectively chosen to ignore crafting a more successful product for its home market in favor of chasing higher circulation in the national market.

These problems are compounded by the New York Times' management's longstanding leftist tilt in the newspaper's news and editorial coverage, which effectively sabotages the newspaper's ability to successfully reach a wider, more politically diverse, audience by limiting the newspaper's attractiveness to consumers in that bigger market. 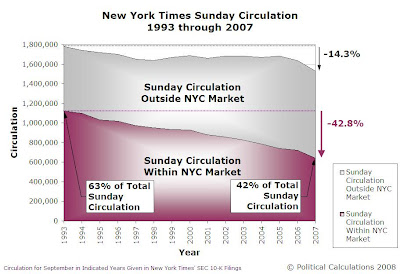 And for good measure, here's our table showing the data underlying the trends shown in the New York Times Sunday circulation chart:

The declines documented above reflect a worsening business situation for the New York Times, as lower circulation figures point to lower revenues realized through advertising and subscriptions. While the New York Times is now moving to grow its online presence and corresponding advertising revenues, online ads generate far less revenue than do traditional advertisements, which strains the company's financial performance.

This distress is evident in the newspaper's stock price, which we've shown from January 1998 through March 2008 (to date), in the chart below (via Yahoo! Finance):

The price of the New York Times' Company stock grew as the newspaper transitioned to become a national newspaper up until 2001, reflecting the peak of the newspaper's success with this strategy in holding off greater declines. However, since then, the company's stock price has dropped with its declining fortunes.