Political Calculations
Unexpectedly Intriguing!
April 14, 2008
Why Does the Government Hate People Earning Between $30K and $45K?

We decided to take a closer look at our chart comparing the steeply progressive income tax rates of 1954 against the much flatter income tax rates of 2006, and in doing so, came up with a question: Why does the government not want to give big tax breaks to people who make between $30,650 and $45,113 (in constant 2006 U.S. dollars)?

To understand why we're asking, here's our original chart with the region highlighted (and yet another slightly different version of our question): 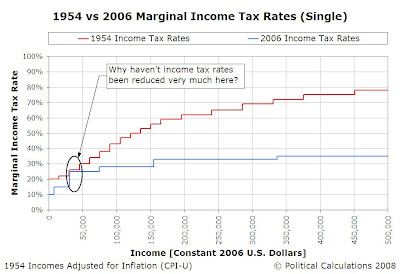 And here's a close up view of that area of interest, which also shows the percentage by which the various tax rates have been slashed over the years from 1954 to 2006 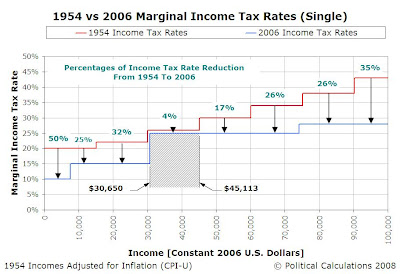 Previously, in another project, we noted that the 95th percentile for individual income earners was $97,656 in 2005, which means that our chart above applies for a very large percentage of income tax payers in the U.S. Given that those making less than this amount and more than this amount have realized the greatest percentage decreases in their marginal tax rates, why is it that the government won't cut the people in the $30-45,000 income range that much of a break?

We'll attempt to answer ourselves tomorrow!