Political Calculations
Unexpectedly Intriguing!
May 1, 2008
67,024+ Pages of the US Tax Code vs Transparency

How much income tax could the U.S. federal government collect if it collected all the income tax it could?

To find out, we took our model of the distribution of household Adjusted Gross Income for 2005 and figured out about how much the government would rake in if it did away with all the standard and special exemptions, deductions, tax credits and whatnot that make the U.S. tax code something other than perfectly transparent to U.S. taxpayers.

Here's our chart showing how much the government would collect for each $100 interval of U.S. household adjusted gross income ranging from $0 through $500,000 in constant 2006 U.S. dollars. We added up all these amounts for each of these intervals going up from $0 through one trillion U.S. dollars. Our results are summarized below the chart: 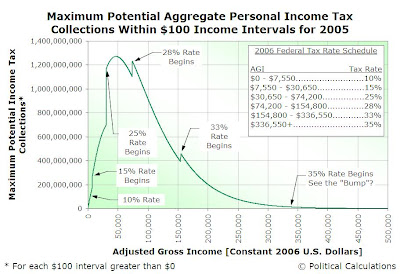 We find without all those things that legally reduce the amount of household income that can be subjected to personal income taxes, the U.S. federal government would collect upwards of 1,527.8 billion U.S. dollars (in constant 2006 U.S. dollars.)

Meanwhile, with all those things that legally reduce the amount of household income that can be subjected to personal income taxes, the U.S. federal government actually collected roughly 1,044 billion U.S. dollars from those personal income taxes in 2006, for a "collection efficiency" of 68.3% of that 1,527.8 billion USD in "potential" collections.

Expressed differently, if every one of the 132,611,637 households that filed personal income tax returns in 2005 were exempted from paying any income tax on the first $16,750 of their incomes rather than spending millions of hours of time needed to track deductible expenses and preparing tax returns, not only would tax filing households with adjusted gross incomes less than $16,750 fully escape paying any personal income tax, the federal government wouldn't even notice a difference in how much money it collected from all of them.

Speaking of which, here's how the tax collection picture would shift with such a change: 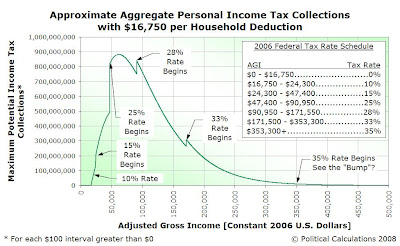 While implementing this specific policy would not make much sense, as a single standard deduction like this would strongly favor single individuals over families, to name just one example of where it would fall short of meeting the needs of U.S. taxpayers, it does however suggest that the laws governing income taxes could be a lot more straightforward and transparent than they are in today's 67,024+ page tax code.

Need proof of that lack of transparency? Once you know how much income you'll earn this year, just answer this question for yourself: "How much income tax will I have to pay this year?" If you can find the answer to the question in less than five minutes, you're a very special, and rare, individual!