"Even if the capital markets crisis resolves, it does not mean that this country will not go into a bad recession," said CEO James Dimon, whose bank saw its first-quarter profit fall by half due to the recent collapse of the U.S. mortgage market. "The recession just started."

That contradicts a lot of mainstream media reporting, which has created the impression that a recession has been well underway since the beginning of the year. It also contradicts what the stock market would seem to be telling us as well, as it would seem to be not going along with the media's "we're already in the worst recession ever" narrative.

We wondered what if Jamie Dimon is right? While we would expect that as the CEO of a major financial institution that he would be seeing the most distress in the U.S. economy, given that the financial sector has born the brunt of the bad economic news to date, what other data is there that might point to the economy going into recession just now?

Or rather, what data can we use to put our fingers on the real-time pulse of the U.S. economy? It then struck us that we already had a pretty sensitive way to visualize how the U.S. economy is doing that is independent of the banking and financial sector of the U.S. economy: the growth rate of imports from China.

Here's why that might work. When the U.S. economy is growing, people buy goods that may be produced elsewhere in the world to satisfy their demand. Since China produces large quantities of consumer goods, things that people tend to buy more of in good economic times and less of in not-so-good economic times, the year-over-year growth rate of trade between the U.S. and China can be used as a near real-time measure of how the U.S. economy is doing.

Going to our data, we noted that back in 2001, during the last recession, the growth rate at which U.S. imported goods and services from China dropped to roughly zero, staying at that level throughout the entire period in which the NBER found the U.S. economy to be in recession. And if we look at the most recent data, we see that same phenomenon is taking place today: 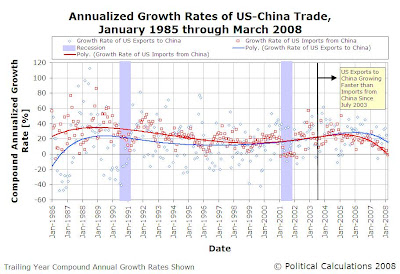 A quick side note before we continue: While we see the year-over-year growth rate of imports from China going to zero both today and back in the 2001 recession, we don't see a similar pattern in the preceding recession of 1990-91. Our speculation is that with China having just undertaken major economic reforms to open up international trade in the mid-1980s, the level of U.S.-China trade was not yet established enough to be negatively affected by this recession.

More interesting, we see that the rate of growth of China's exports to the U.S. has been declining steadily since January 2007, in contrast to the sharp drop coinciding with the 2001 recession.

Meanwhile, we see that the level of the United States' exports to China has also been declining since January 2007, which suggests that the Chinese economy is slowing down as well.

And it would appear to us that our prediction from 2007 that the U.S.' so-called "trade deficit" with China might have permanently topped out might very well be spot on.