Teenage workers are disappearing from the U.S. workforce. Something appears to have happened to drive them out of the workforce in large numbers. Phil Miller and Doc Palmer say that the recent mandated hikes in the minimum wage very likely has something to do with the teenagers getting disappeared, but no one in the media is willing to finger them as a promising culprit behind the workplace disappearances.

Could they be right?

Here's what we found when we compared Table 7 of both reports, which breaks down the number of hourly wage earners by age group. Our first table shows the number of hourly wage earners in each wage group, broken down by those making more than the federal minimum wage for 2005 and 2007 and those earning the federal minimum wage or less for both years: 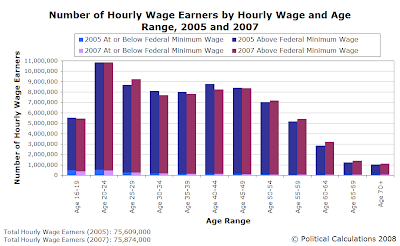 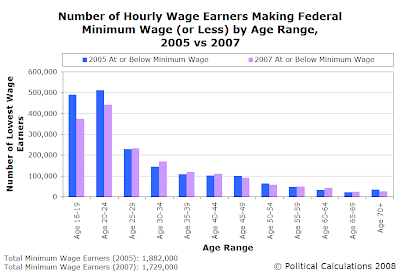 Between 2005 and 2007, the total number of those making the federal minimum wage or less decreased by 153,000, an 8.1% drop below the 2005 figure of 1,882,000 minimum wage earners. We can see that the Age 16-19 and Age 20-24 groups saw dramatic declines in the number of people earning the minimum wage or less, while all the other age groups either saw increases or fairly minor decreases.

In fact, this is very likely what we do see for the presumably more experienced workers above the age of 25.

In our next chart, we measured the differences between the total number of hourly workers counted between 2005 and 2007 and the number of minimum wage earners for each age group. Here's what we found: 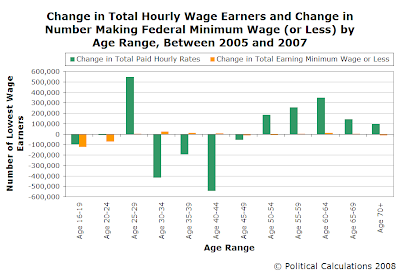 This chart confirms that for teenagers, those between the ages of 16 and 19 years old, all of the jobs that disappeared in 2007 were minimum wage jobs. In essence, a total of 94,000 hourly jobs disappeared for this age group overall. This figure is the net change of this age group losing some 118,000 minimum wage earning jobs and gaining some 24,000 jobs paying above this level.

This represents what we believe to be the effect of the higher minimum wage level increasing the barriers to entry for young people into the U.S. workforce. Since the minimum wage jobs that once were held by individuals in each age group have disappeared, total employment levels have declined as those who held them have been forced to pursue other activities.

Now consider this: The minimum wage was just reset on 24 July 2008 to $6.55 per hour, a 27.2% increase from where it was in early July 2007. Our best guess is that a lot of additional teenagers will be pursuing those other activities.

Meanwhile, the lack of employment opportunities for the least educated, least skilled and least experienced segment of the U.S. workforce will likely have costs far beyond the benefits gained by those who earn the higher minimum wage. The government might be able to make the minimum wage earning teenage worker disappear, but they didn't do anything to make the teenagers themselves disappear.