After finding that the members of the black population of the United States over the age of 80 are far more likely to live longer than their counterparts in the white population, we wondered why the story is so different for those younger than 80. To see what we mean, let's look again at our chart showing the statistical number of years of remaining life expectancy by age and race for both the black and white populations in the United States: 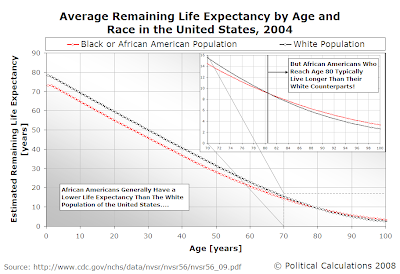 The Percentages of Survivors

From here, it makes sense to go back to the life tables to more directly compare the two populations. More specifically, we went to Table B, which shows the survivorship of each population, or rather, the statistical number of people for each 100,000 born alive within each group who reach a given age. We converted that statistical number into a percentage and charted the differences between these two racial groups: 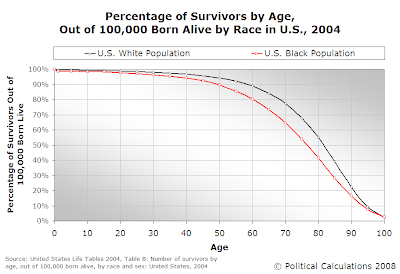 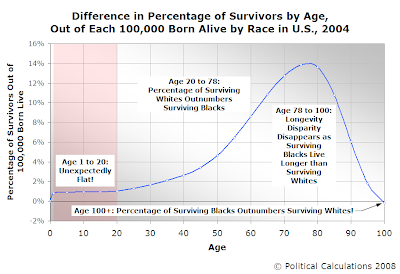 Then we see something that we didn't expect to see. From age 1 through 20, there is no significant increase in mortality for the black population with respect to that of the white population. This outcome is evident in the flatness of the curve throughout these ages. We should also note that if not for the higher rate of infant mortality for the black population, the number of surviving members for each 100,000 born alive would be nearly identical to that of the white population through the age of 20.

So much so that by Age 100, the number of blacks surviving to the century mark would outnumber their white counterparts if the nation were 50% white and 50% black.

Building on our previous remarks regarding the higher life expectancies of those in the black population over the age of 80 compared to their white peers, if the racial prejudice of the majority white population toward the minority black population were the primary driver of the difference between the life expectancies and survivorship of the members of the black and white populations of the U.S., it seems exceptionally odd that the black population's children and teenagers are so evidently unaffected by it, while the most elderly are likewise unaffected by it. After all, why would racism play favorites by age group?

More Pieces of the Puzzle

For example, foreign-born blacks who immigrate to the United States tend to live much longer than blacks born in the U.S. - here's the relevant information from the background for Health, Life Expectancy, and Mortality Patterns Among Immigrant Populations in the United States, a 2004 study by the National Institute of Health's Gopal K. Singh and Barry A. Miller:

The increased life expectancy for immigrants comes despite higher levels of poverty compared to the native-born population:

The study reviewed millions of death and health records from 1986-94. Though the numbers are old, more limited studies of recent data suggest the same patterns hold true, although life expectancy is generally rising.

The records showed the average American-born black man could expect to reach 64, while a black man born overseas would likely live beyond 73 if he immigrated. In the case of an African-born man remaining in his homeland, he might well have died before his 50th birthday.

Perhaps most astonishing is that immigrants outlive the U.S.-born population even though they're more likely to be poor and less likely to see a doctor, often a prescription for a shorter life.

Meanwhile, where blacks live within the United States would appear to have a dramatic effect upon their life expectancy. Blacks living in urban areas have a disproportionately high mortality rate as compared to their suburban and rural peers. A 2004 University of Michigan study led by Arline T. Geronimus into Urban/Rural Differences in Excess Mortality Among High Poverty Populations: Evidence from the Harlem Health Survey and Pitt County Hypertension Study outlines some unexpected differences (emphasis ours):

As shown in Table 1, we also found that despite very high poverty rates, African American residents in rural areas did not share the highly disadvantageous mortality profiles of their urban peers. Indeed, they fared almost as well as blacks nationwide. For example, relative to white men nationwide aged 15-65 in 1990, the excess death rate per 100,000 population for black men nationwide was 374; in a rural Delta Louisiana population with a 47% poverty rate it was 391; whereas in Harlem (with a 43% poverty rate), it was 1,296. For black women residents the excess death rates in 1990 were 217 nationwide, 249 in Delta Louisiana, and 534 in Harlem (see Geronimus et al. 1996, 1999, for similar findings for a broader range of local populations). Moreover, in analyses comparing 1980 and 1990 mortality data for the same local areas, we found that the urban/rural divide increased substantially over the decade because increases in excess deaths were much higher in the urban compared to the rural areas (Geronimus et al. 1999). This finding was most pronounced among men, and was largely accounted for by deaths attributed to chronic disease. For example, over the 1980s excess deaths attributed to circulatory disease or cancer each doubled among young and middle-aged Harlem men.

And so we have our first clues as to where we're going next.

Where We're Going Next

After that, we'll discuss how a number of what we're going to call African curses and blessings are at play in the black population, and how a disease that kills millions in Africa, but hardly any in America, might open the door to erasing the gap in life expectancies between blacks and whites in the United States.

Ultimately, we'll offer a testable hypothesis that suggests that just a handful of comparatively simple factors explain nearly all the discrepancies between the documented life expectancies for all the groups we identified in this post. Moreover, we'll point to a seemingly simple and inexpensive solution that that might go a long way toward eliminating most of the observed disparities in the life expectancies between the black and white populations of the United States.

We say "seemingly simple" since the solution is one that the U.S. government has already provided, but which turns out to be virtually ineffective for a very large portion of the black population in the U.S. We'll explain why and then we'll point to more effective solutions already widely available in the market.

Somehow or another, we'll also figure out how to fit cattle into the picture as well, as they play a remarkably significant role in the whole thing.

We never said we weren't ambitious! We may be right or we may be wrong, but that's for real science to settle....

All the Posts in the Series

For reference, here are all of the posts in our series covering the racial disparity in life expectancies in the United States: