The Delaware News Journal recently featured an analysis by Cris Barrish, which suggests that 2008 Democratic Party vice-presidential nominiee, Senator Joseph Biden (D-DE), may have disproportionately benefitted from two real estate transactions involving his political supporters. We thought we might take a closer look at each transaction.

The two deals both occurred back in the first quarter of 1996. One deal involves the purchase of the property where the Senator established his current home in Greenville, Delaware from a real estate developer, while the other is related to the sale of his previous home to an executive with credit card banking powerhouse MBNA.

Looking first at the purchase of the property where the Senator built his current home, here's how the Delaware News Journal described the transaction:

In March 1996 -- one month after selling to Cochran, property records show that the Bidens bought the land off Barley Mill Road from Stoltz, paying $350,000 cash.

The lot, which includes a small portion of a four-acre lake and is near the private Tatnall School's sprawling campus, has a narrow driveway that slopes down to a wide lawn. Real estate agents said the oddly shaped lot is in a prime location.

Like Cochran and MBNA, Stoltz and his family have been longtime Biden supporters. Keith Stoltz is chief executive of Stoltz Management and his father once ran a real estate brokerage. Keith Stoltz donated $875 to Biden's campaign in 1996, one month after Biden bought his lot, and since then has given another $7,925, according to The Center for Responsive Politics, a nonprofit group in Washington, D.C., that tracks federal campaign spending.

Stoltz's parents, Jack and Susan Stoltz, along with his wife, Margaret, and brother Randy, also have given Biden's campaigns $24,900 since 1994.

Keith Stoltz, who used to live on an adjoining property, said he paid $350,000 for the land where Biden now lives "to maintain the privacy my family had enjoyed," even though the lot "was priced very aggressively."

He rejected Biden's offer, Stoltz wrote, and told Biden the secluded lot "was exceptional" and worth $350,000 "in a normalized market."

The implication suggested by Barrish's analysis is that Senator Biden disproportionately benefitted by receiving a substantial discount on campaign contributor Keith Stoltz' property, compared to buying it at its "full valuation." To find out if that was the case, we drew upon the resources of the Office of Federal Housing Enterprise Oversight (OFHEO), which maintains a historical database of housing price appreciation for each quarter going back to 1976 for each state in the U.S.

The article indicates that Stoltz originally purchased the property that was later sold to Senator Biden in 1991 for $350,000. So, we used that initial value and calculated the value of the property, assuming that it followed the average changes in house values in Delaware for each quarter from 1991 through the first quarter of 1996, when Biden purchased it. Our results are summarized in the chart below: 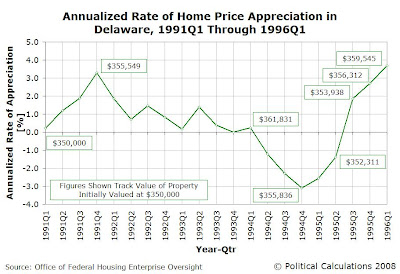 Using this method, we find that the value of the property Senator Biden purchased in March 1996 would have been worth between $356,312 and $359,545. At the stated purchase price of $350,000, that represents a 1.8-2.7% discount from those values. As such, there is no real indication that Senator Biden disproportionately personally benefitted from this transaction.

On the seller side, we'll note that if the property had involved paying the typical real estate brokerage commission of 6%, that even at the higher valuation of $359,545, the seller would have pocketed just shy of $338,000. By concluding the transaction without utilizing a Realtor ®, and even with selling for a slight discount, Stoltz came out far better than he would have otherwise.

With that being the case, we confirm that Senator Biden did not disproportionately personally benefit from the purchase of his current property, nor was Keith Stoltz materially disadvantaged in the transaction.

Coming Up - A Different Story?

Tomorrow, we'll use the same method to consider the sale of Senator Biden's previous home!

Our tongue-in-cheek look into the negotiations and transactions surrounding Senator Obama's purchase of his current home - kind of a fun introduction to the relative valuations involved, all in the context of a trip to McDonald's!