Political Calculations
Unexpectedly Intriguing!
30 October 2008
How Much Was Obama's House Really Worth When He Bought It? 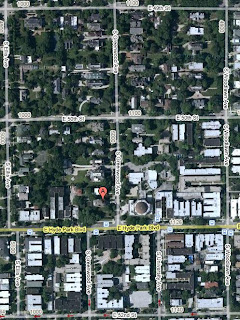 But how much was it really worth?

We've been systematically working through to the answer to that question. Previously, using a third party copy of a public record that indicated that the house at 5046 S Greenwood Ave in Kenwood, Illinois had been purchased for $825,000 on 25 August 2000.

With that data point, we next assumed that properties in Senator Obama's neighborhood were growing in value at or near the same rate at the rest of the Chicago metropolitan area and projected the property's value forward in time based on that presumption. We found that in June 2005, when Senator Obama closed on the property, it would have been worth $468,502 less than what he paid. Projecting forward to the end of the second quarter of 2008, it would be worth $1.37 million.

Then all that changed. Newsweek's Michael Isikoff published professional appraisal data from November 2005 that allowed us to precisely determine the rate at which real estate in Senator Obama's neighborhood appreciates. As it happens, in Senator Obama's neighborhood, property values have historically grown at a much slower rate than that seen generally throughout Chicagoland.

Getting the Numbers Right

Today, we're going to go back and redo our property value projections, but first, we're going to revisit the value that the previous owners of Barack Obama's house paid for it. We're starting there, because in reviewing previous news articles, we found a pretty big discrepancy between the copy of the public record detailing the value of the transaction and what was being reported in the media.

Here's the Boston Globe's Binyamin Appelbaum description of the house that Obama bought back on 16 March 2008:

It was a fitting home for a new senator. And it was a good deal. The list price was $1.95 million, but the Obamas paid $1.65 million, the same price the sellers had paid five years before.

Leaving aside Appelbaum's slobbering prose description of the house's luxurious features, he's reporting that the Wondisfords purchased the property for $1.65 million.

So how much did they really pay? If they paid $1.65 million as Appelbaum reports, then that $825,000 figure we previously found is way off. If that $825,000 figure is right, then the house is bizarrely overpriced, as the Wondisfords purchased the house *after* it had been fully renovated with all those wonderful luxury features that a drooling Binyamin Appelbaum believes befits a new U.S. Senator, so their value should be fully reflected in the price they paid. 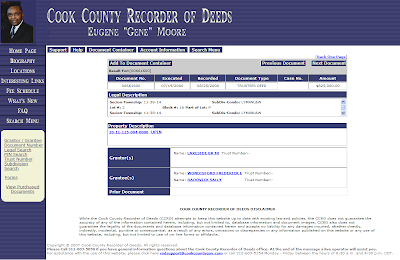 Searching the Cook County Recorder of Deeds transaction database by the house UPIN identifier turned up additional records, including the mortgage amounts documented for the Wondisfords' purchase of the property in 2000. Here, we believe we found the source for a lot of erroneous reporting regarding the price the Wondisfords paid for the house when they originally purchased it.

There are two separate mortgage records for the Wondisfords' purchase of the property at 5046 S Greenwood Ave in the Hyde Park neighborhood of Chicago:

We also see that if we add these values together, we obtain a value of $1.65 million, the same amount we see mentioned in all the media reports that provide this information. But, if we take the larger amount of $1,237,500 and subtract the lesser $412,500 from it, we obtain a value of $825,000, the amount recorded on the Trustees Deed.

So Which Is Right?

The answer is neither, but we'll note that the real answer is already evident in these records!

The amount for which the Wondisfords purchased the property that Barack Obama would buy from them less than five years later is $1,237,500. We know this is the case since the University of Chicago is the Grantee on the smaller mortgage.

At the time, the Wondisfords were in the process of moving from Massachusetts to Chicago since they had been hired away from Harvard University by the University of Chicago's medical school. As with most corporate relocations, the hiring firm will provide relocation assistance for its new employees.

Here, we presume that the Wondisfords had not yet concluded the sale of their previous residence in Massachusetts, so the University of Chicago assisted them by loaning them up to one third of the value of the new residence they would acquire in Chicago to cover their down payment, allowing them to settle in before beginning work in September 2000. The University of Chicago would then be recompensated when the Wondisfords completed the sale of their previous home in Massachusetts.

We confirm that the $412,500 is exactly one third of $1,237,500, which we recognize as being the Wondisfords' negotiated purchase price for the house at 5046 S Greenwood Ave in Chicago.

Finally! How Much Was Obama's House Really Worth When He Bought It?!

Now that we have the data and the tool to do something useful with it, the rest just falls into place! We've projected the actual value of Senator Obama's property all the way from the third quarter of 2000 through the second quarter of 2008 in the chart below, and calculated the amount that Senator Obama overpaid for the property: 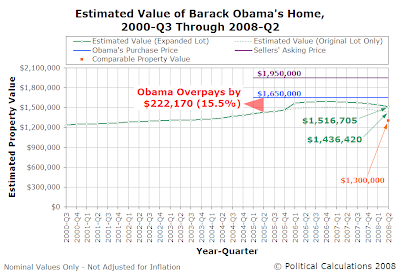 Projecting forward, we see a bump in his property valuation where Senator Obama acquired a 10 foot by 150 foot long strip adjacent to his property (one-sixth of the "Rezko Lot") in the first quarter of 2006. That transaction took place in January 2006.

And going into today, we find that the most current value that we can project for the house that Barack Obama bought in June 2005 is $1,436,420. Considering the expanded property, we estimate the total value of Barack Obama's primary residence to be $1,516,705 as of the end of the second quarter of 2008.

You can use the tool below to confirm our estimates for Barack Obama's house (not including the expansion of his lot):

What Does This Tell Us About Obama

There is no question that Barack Obama knew the property was overvalued. We recognize this in that his first bid for the house was for just $1.3 million, which as we saw yesterday, would put it right in line with the other properties that have recently sold that are very comparable to the house on paper!

His second bid, $1.5 million, as compared to the true value of $1.43 million, was high, but not outrageously so. His third, "successful" bid of $1.65 million more than vaults over that line.

More disturbing, if we accept that the only thing keeping him from spending the $1.95 million the previous owners were originally asking was his inability to get that much money, what could the United States be in for should Senator Obama become President Obama? Remember, the amount of money he could get was the only constraint he had in the transaction! Ethical constraints, as recognized by his reliance upon favors done for him by shady political associates, were absent from the beginning.

Discounting that apparent reliance upon receiving favors from political associates for his personal benefit, we find that the price that Barack Obama paid for his house reveals a serious lack of fiscal discipline, all the more remarkable for it being on display in the largest single financial transaction of his life to that date. Rather than carefully steward his own money, he instead sought to fulfill his vision of "a fitting home for a new senator."

He might be President. What price will America be compelled to pay to fulfill his grandiose ambitions? And how much will it cost to fix the certain damage?