Having just gone through one of the largest one-day point drops in stock market history, an event driven by the failure of the U.S. House of Representatives' leadership to address a building credit crisis in the financial sector of the U.S. economy, one might reasonably expect that the market would have continued to decline as the leadership of the U.S. House then chose to go on a two-day holiday.

Instead, stocks rallied upward sharply on the day following the market carnage in one of the largest recorded one-day gains.

That's partly due to expectations that the U.S. Senate, which continued in session, will take a more responsible approach to addressing the crisis in U.S. credit markets, but is mostly due to the underlying strength of the dividends that support stock prices. Without a corresponding collapse of expected corporate dividend payouts to shareholders, stock prices will not continue to plummet.

That reality is reflected in our chart showing the average of each month's closing value for the S&P 500 from January 2008 onward against the S&P 500's trailing year dividends per share: 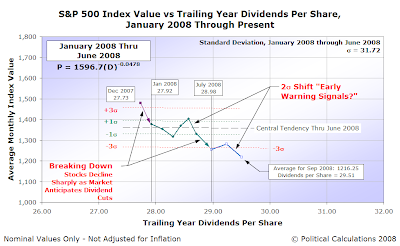 In the chart, we see that as the S&P 500's dividends per share have continued to increase, stocks have largely followed a "stair-step" downward path, rather than stalling out altogether or retreating, which is more indicative of a collapsing market.

That may still yet come, depending upon how far the credit crisis affecting the financial sector of the U.S. economy penetrates into the healthier sectors of the U.S. economy. Since we're now entering the fourth quarter of 2008, we would expect that we will continue that forward progression, as Standard & Poor continues to indicate that the trailing year dividends per share for the S&P 500 in 2008 will be $30.30, the value they've anticipated all year.

At this point, that forward progression is being driven by firming commitments from companies on track to deliver these dividend performance targets to their shareholders. Since those commitments would only extend through the end of this year, we would anticipate that January 2009 will see the bulk of companies revising their forward outlooks to less optimistic outcomes, should the problems of the financial sector spread into the rest of the U.S. economy.

How much that is, remains to be seen. As for the strength of the non-financial sectors of the U.S. economy, we've created a dynamic table showing all the changes in corporate dividends recorded through August 2008, which we've extracted from S&P's Issue Indicated Dividend Rate Change spreadsheet to demonstrate how relatively contained the finacial sector's problems have been to date. You can sort the data from low-to-high value, or vice-versa, by clicking the column headings. Enjoy!