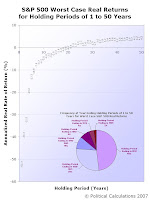 Today, we're going to introduce a bold investing strategy that's so daring that, well, let's just say that it's not for pansies....

Let's introduce the strategy by revisiting our own archives, specifically, a post from 15 February 2007 in which we identified the best rates of return ever obtained for investments in the S&P 500 index for holding periods ranging from one to fifty years. Here are our comments, where we recognize a unique correlation between the worst stock market returns and the best (emphasis ours):

Unlike our previous look at the worst case real returns for the S&P 500, the best case performance for investments made in the index are largely defined by the year in which they begin, instead of when they end.

If nothing else, this observation does suggest a unique stock investing strategy. Should the market ever break its records for worst case real return performance, that may be a really good signal that it's a really good time to go "all-in"!

Do you have the guts for that kind of strategy? If so, continue reading....

No Pansies Allowed Below This Point.... 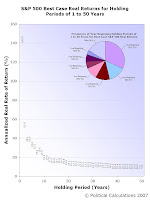 Assuming you're still with us, let's be up front about the risk. While it's unlikely you would lose all your investment, you might lose a substantial chunk of it. This is a highly speculative strategy to say the least, one that would require you to buck widespread fear and panic running amuck in the stock market. The amount of your investment should be an amount of money that you're very comfortable entirely forgetting about ever having.

Adding to the insanity, this strategy relies on you to ride out the worst the market might dish out over the period that you hold your investment as a buy and hold type investment. That's good news for today's stock market, given the restrictions that have been placed on shorting stocks, the more traditional way to make money from falling stock values.

In doing that, we're going to disregard the effects of inflation but will incorporate the effects of dividend reinvestment. The reason why is because many of the very worst rates of return ever recorded are associated with periods of deflation. If we incorporated that data, those rates of return would be higher than if we did not! Another advantage is that you will be able to compare the data from the historic record to confirm the results with actual non-inflation adjusted numbers.

In execution, the strategy is really simple. If the market equals or breaks below the average monthly index value targets in the table below, that's your signal to pull the trigger and invest for the length of time represented by the indicated holding period. Once again, the figures below apply only for the month of October 2008. They do not apply for any other month:

Did we say anything about this investing strategy not being for pansies?