The stock market really went into reverse in October 2008. Our chart below shows the extent of the movement as measured by the average of the S&P 500's daily closing value against the index' trailing year dividends per share: 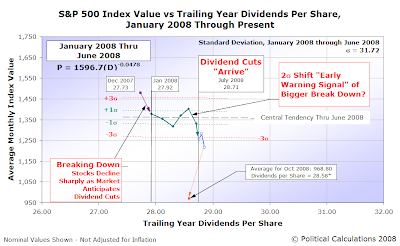 We attribute most of this movement to the dividend cuts finally realized by the troubled financial sector of the stock market. Since dividends represent the "sustainable" component of corporate earnings for investors, the negative change in their expected future value directly drove stock prices lower.

Looking ahead, we anticipate that stock prices will continue to dwell at these levels as trailing year dividends for the S&P 500 will continue to decline. If Standard and Poor's current projections are correct, by year's end, their level will be reduced to $28.05 per share. 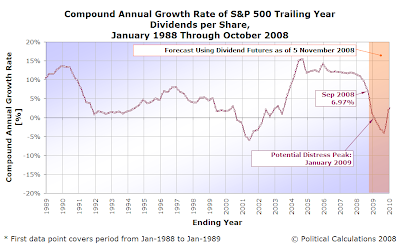 Our second chart presents the annualized rate of growth of trailing year dividends, combining historic reported values with S&P's projection for the fourth quarter of 2008 and indexArb's dividend futures for upcoming quarters.

Our data already suggests that the stock market, as represented by the average of daily closing values for each calendar month, will bottom in January 2009, give or take a month. We believe we've seen the lowest point of the market (839.80) as measured by its intraday values for the year. As we measure stock prices by the average of a calendar month's closing values for our analysis, we find that it's not unreasonable that this value for November, December or January 2009 may fall below October 2008's value of 968.80, even without approaching new daily or intraday lows.

As currently projected by their futures, investors are expecting dividends for the S&P 500 to continue to decline through the third quarter of 2009. If we assume that the rise in dividends after this point holds and also assume that stock market investors are looking roughly six months ahead, that would suggest that stock prices will start to rise steadily in the first quarter of 2008.

That factor would also seem to suggest a bottom for the stock market occurring in or around January 2009.

And that, of course, assumes that the S&P 500's dividends will rebound as investors would appear to currently expect. We'll observe that the future has a way of changing in unanticipated ways.