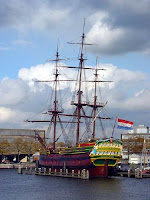 The answer goes all the way back to the year 1602, to the invention of the world's first true stock: the Dutch East India Company (or rather, the Vereenigde Oostindische Compagnie). The company came into existence in that year as a result of a merger of several established sea merchants, who were collectively granted a geographic monopoly by the goverment of the Netherlands for trading in Asia, as well as the exclusive right to establish colonies there as well.

What made the Dutch East India Company unique was in how the ownership of the company was established and in how profits among the company's owners were distributed. Here, the individual merchants and other owners were jointly issued shares of ownership in the larger company. In itself, this kind of ownership structure wasn't new. The issuance of shares for the purpose of determining how profits would be divided among engaged parties goes back hundreds of years before the creation of the Dutch East India Company, but the concept of a true joint stock company was still relatively new.

It's here though that we see the first advantage the Dutch East India Company gained over a number of its peers. Instead of being organized around a single trade voyage, as many of its contemporaries were, several different trading ventures were combined under one ownership structure. This reduced the risk to the company's owners and investors since it diminished the impact of a single failure upon the profits generated by the combined venture.

That was highly important at the dawn of the seventeenth century, as all it took to make a single failure was a single storm, a single pirate or just plain bad timing, such as delivering your cargo at the same time to the same place as your competition, sending prices plunging. Any one of these could make any prospect of profits disappear quickly.

But it was how the profits that were made would be divided that gave the Dutch East India Company a longevity that would be unmatched by its contemporaries and ultimately helped make it the world's richest company for nearly two hundred years. That innovation was to divide the generated profits periodically among all of the company's stock holders. Those payments are called dividends.

What dividends did for the Dutch East India Company's investors and owners was to reduce their risk of owning stock in the company for long periods of time. Here, investors could instead collect their proportionate share of the profits generated by the venture instead of having to take steps to dissolve and liquidate the company to be able to fully realize their share of those profits. With the periodic receipt of dividend payments, investors were content to allow the company to continue operating. And when the company flourished, and its dividends grew, it became even more attractive to investors, who bid the price of the company's stock up to reflect its success in generating those precious dividends.

That, in turn, led to the success of the third great innovation whose success directly stems from the formation of the Dutch East India Company and its first ever issuance of stock: the stock exchange.