Political Calculations
Unexpectedly Intriguing!
December 11, 2008
How To Deal with That Old Saturn

Env-Econ's Tim Haab has a problem: his nearly brand new car. Tim explains how a vehicle that was ideal for him and his family has suddenly become much less so, all without any significant change in its physical condition (or his family's!):

July 2008: I trade-in the decrepit family mini-van, complete with enough McDonald's french fries under the seats to make my own Happy Meal, for a new 2008 Saturn Aura. Why Saturn? Because GM finally seemed to get the mid-size family car right. Good fuel efficiency, good quality, nice-looking. That and they were offering employee pricing to Ohio State employees, but mostly the other stuff.

General Motors hasn't officially announced the end of Saturn, but in a restructuring plan submitted to Congress, the automaker said it would concentrate resources on four core brands -- Chevrolet, Cadillac, Buick and GMC.

You'd think as an economist, I might have seen that coming before I bought a Saturn.

So, as we understand it, Tim finds himself on the losing end of GM's woes for several different reasons, including:

To be sure, the Saturn Aura is a solid vehicle with decent fuel mileage and environmental performance. But we must consider the worst-case scenario for Tim. What if he can never dispose of it? Sure, he could dump it into Chesapeake Bay in a misguided attempt to provide much-needed habitat for Maryland blue crabs, but as an environmental economist, he'll likely have calculated the low benefit to cost ratio and will discard those plans. Maybe. Remember, he bought a Saturn.

Instead, we believe we have an ideal solution for Tim. He should continue to drive his car for a few years after the Saturn division is no more. At the end of that time, he should begin scuttling his Saturn Aura to salvage its parts, particularly the engine and transmission components, or really, anything in front of the driver and passenger seats. This way, he can get maximum value for the parts that will become increasingly difficult to replace in the years ahead.

That leaves the question of what to do with the rest of the heap, which at this point would be little more than the back end of the car. Since Tim is a college professor at a university operated as an outreach effort by a major athletic program, we would recommend Tim pimp the remainder of his ride as illustrated below: 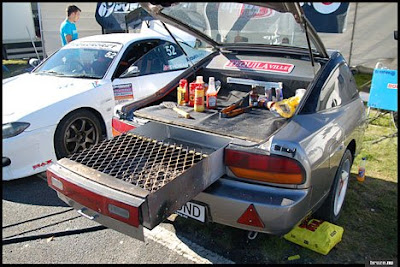 The perfect solution for the professor who wants to tailgate in style and get maximum value out of his manufacturer-abandoned vehicle!