Who, or what, could have inflicted the blunt force trauma visited upon America's teenagers that resulted in so many fewer teens with jobs?

That's the question the Economic Detective is left with after first establishing that the act was not the result of natural causes and that the first blow was struck on the victim sometime from November 2006 through January 2007. Meanwhile, the victim's autopsy revealed that the blunt force trauma wasn't aimed at teens so much as it was aimed at their employers. The teens, it would seem, were just the sorry saps who were in the wrong place at the wrong time.

Let's identify the likely suspects, or rather, those whose rap sheets show that they could pull off this kind of caper:

Now, let's interrogate them in order to see what they'll tell us.

This whole investigation got started because teens were going disappearing from the U.S. job market in numbers that were way out of sync with their representation within the workforce. We wanted to first find out if demographics were behind the change in employment figures. After all, if the proportion of teens in the working population at large took a dive, so would their percentage representation in the employment pool. 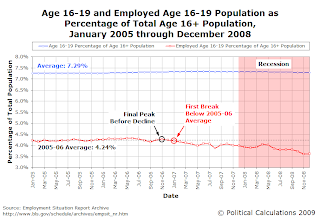 The chart to the right summarizes what we found when we dug into the numbers. From January 2005 through December 2008, the percentage of individuals Age 16-19 with respect to the working age (Age 16+) population of the U.S. stayed nearly constant, ranging within six hundredths of a percent of an average 7.29% throughout the period. Meanwhile, the percentage of employeed Age 16-19 year olds went from averaging 4.24% during 2005 and 2006, beginning their roller-coaster ride descent below that level in January 2007.

So, demographics didn't do it, but could The Demographic Kid explain why teens were so affected? We applied our unorthodox methods to get an answer. 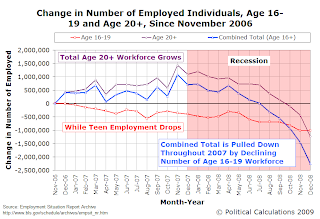 The chart to the left confirms that the employment picture for everyone older than 19 throughout 2007 was pretty good. By the peak of the business cycle in December 2007, preceeding the current recession, the total Age 20+ workforce had grown by nearly 1.1 million. Meanwhile, the job market for those between the ages of 16 and 19 had turned south, with the U.S. economy shedding some 389,000 jobs over the same time, pulling the total change in total employment from November 2006 down to 707,000.

So, what makes the Age 16-19 workforce so different from their older counterparts in the job market? The Demographic Kid 'volunteered' that compared to the Age 20+ workforce, teen workers are inexperienced, unskilled and uneducated. Plus, the Kid thinks a lot of them smell really bad.

It was pretty clear that we weren't going to get any more useful information from The Demographic Kid, so we turned our attention to

Despite his resemblance to Nouriel Roubini, "Dr. Doom" turns out to be more of a what than a who. "What" would be negative economic forces that lead to recession, or more simply, a worsening economy.

Our first question: Could a worsening economy throughout 2007 have caused teen job losses? After all, history has shown that when an economy goes into recession and contracts, people lose their jobs all over. 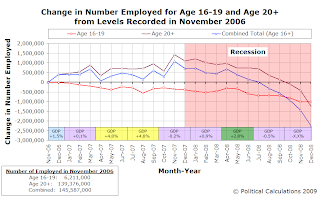 We started in with the big picture. The chart to the right modifies our earlier chart showing the change in the number of Age 16-19, Age 20+ and Combined total employment levels by adding the inflation-adjusted GDP growth rate measured by the Bureau of Economic Analysis for each quarter covering the period from November 2006 through December 2008.

We also see that the teen employment levels throughout 2007 would appear to defy the economic growth trend. For example, with the real GDP growth rate clocking in at a high 4.8%, we would expect that teen employment levels would rise in response. Instead, we see a general decline in these levels throughout 2007, with an unexpected and unusually large step downward in August 2007, some five months into the period with the highest rate of economic growth during the year.

But, Dr. Doom makes a good point: not every part of the economy was growing in 2007. Some were, in fact, contracting pretty severely. One case in point: the U.S. housing sector. Here, after booming for several years, the U.S. housing market had begun slowing in mid-2005 and by mid-2006, sales of new and existing homes were slowing dramatically and the housing sector was, in Nouriel Roubini's words, "in free fall."

So, we would therefore expect employment levels to be falling in the residential construction industry and other economic sectors closely tied to U.S. housing markets, such as mortgage lenders, home furnishings, etc. during this period. The question for us is: "how many teen jobs are in these sectors?" 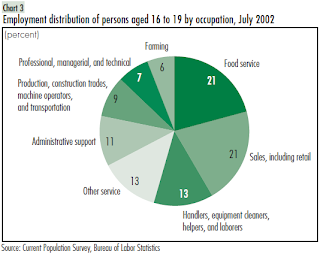 There's little doubt that the housing sector was declining in 2007, however that decline accounts for very little of the decline in the teen employment situation. No, far more teens are employed in other sectors of the economy, as the chart to the left demonstrates, and with just 5.3% of the average decrease in the number of teen jobs from 2006 to 2007, that percentage is pretty much in line with the percentage share of teens in the construction sector.

So we find that there's nothing really disproportionate happening here - Dr. Doom is off the hook.

That leaves just the Public Policy gang as the most likely culprit behind teen job losses. We'll put them under the hot lights of economic interrogation in short order....