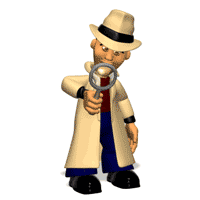 The December 2008 Employment Situation report from the Bureau of Labor Statistics did a lot more than just record big jobs losses between November and December 2008, it also revised virtually every employment figure going back to January 2004.

Because it did, we went back and revised our previous analysis of the employment situation for teens, or as the government defines them, those individuals counted as being employed between the ages of 16 and 19.

We'll begin by applying our statistical dating technique to the revised teen employment figures. Here, our goal is to first identify a period of relative equilibrium in teen employment numbers. Our measure of that relative equilibrium is the percentage representation of Age 16-19 employed individuals within the total number of employed individuals of all ages in the U.S.

When such a relative equilibrium exists, the percentage of working teens with respect to the whole U.S. workforce will be generally stable over time and the percentage of employed teens in any given month will bounce around a mean value as the result of natural variation.

We assume that those natural variations are random and will therefore fall into a normal distribution, for which 99.7% of all recorded values will be within three standard deviations of the mean value. 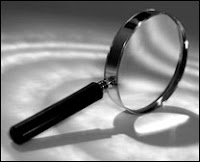 This gives us a tool that we can use to identify when that state of relative equilibrium is holding or has been broken. That tool is called a "control chart," which was invented in 1924 by Walter Shewhart of Bell Labs.

Today, Shewhart's innovation is in widespread use throughout the industrial world to measure and adjust production processes to ensure that manufactured products are produced to desired levels of quality. While control charts are used specifically where processes are controlled, the same methodology they provide for establishing whether observed changes in measured data over time are the result of natural variation (those that have common, or chance-driven causes) or are caused by determinable factors (those that have special or assignable causes) can be applied to non-controlled processes.

So, in our case, even though the percentage of teens within the U.S. workforce is very much not something that's the result of a controlled process, we can still get a lot of insight from using a tool very much like a control chart! 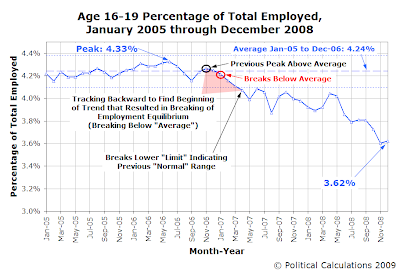 Had enough discussion? Let's get to the chart showing the percentage of teens within the U.S. workforce from January 2005 through December 2008.

In considering this chart, we find a period of relative equilibrium in the percentage of teens with the U.S. workforce running from January 2005 through December 2006. During these two years, the percentage of teens within the total employment of the U.S. averaged 4.24%. Using the three standard deviation measure of the data, we can then define the normal distribution in which 99.7% of all observations would be expected to fall: between 4.10% and 4.38%.

We next note that the recorded data falls below this expected range in May 2007 with a value of 4.07%, and also that it stays below the lower end of the expected range thereafter, continuing in a largely downward trend. This observation tells us that something "broke." More than that, it tells us that the cause is not the result of natural variation, but instead, something not-natural caused the equilibrium to break. But when?

From that point in May 2007, we next go backwards in time to identify if we can clearly determine when that downward trend began. Doing so, we find the last peak in the data occurred in November 2006, at 4.27%. The data prior to this point is all within the expected range.

With the peak being above the average for the baseline equilibrium period, we next identify the first point to break below the mean, which we find to be January 2007's value of 4.21%. This tells us that whatever caused the previous equilibrium to break most likely did so between November 2006 and January 2007.

But before we can do that, we'll need to autopsy the victim....