Political Calculations
Unexpectedly Intriguing!
January 7, 2009
A Year of Disorder, With More to Come

2008 was very definitely not a good year for stock prices as the stock market entered a new period of disorder, somewhat resembling the very opposite of a bubble. But don't just take our word for it - the chart below shows seventeen years of stock market history, plotting the average of each month's daily closing values for the S&P 500 against the index' trailing year dividends per share: 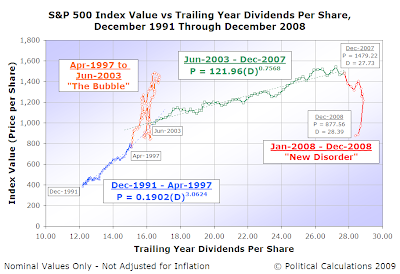 We've corrected the chart above to incorporate a minor correction for the average daily closing value of the S&P 500 for December 2008. The original version is available here.

As you can see, the magnitude of how far stocks fell in 2008 is pretty much in line with how much they rose during the inflation phase of the Dot-Com Bubble, making the current disorder resemble the "evil twin" of the bubble's upward trajectory from April 1997 through August 2000.

We've already incorporated these changes in our signature S&P 500 at Your Fingertips tool, and will be updating the tool again to include December 2008 on 16 January 2009, coinciding with the scheduled release of that month's inflation data from the Bureau of Labor Statistics.