In January 2009, the estimates of the S&P 500's earnings continued to erode, forcing analysts to shift their projections of the index' earnings per share even lower. At the end of December 2008, analysts had projected that trailing year earnings per share for the S&P 500 would come in at $48.05, a figure well off the $92 per share they had forecast back in March 2008. Just a month later, that figure had slipped to $46.86 as reported earnings for major S&P 500 component companies came in lower than expected.

No wonder S&P index analyst Howard Silverblatt has been chickening out on making a projection for dividends per share for the S&P 500 this year! Fortuntately though, he's been on top of the changes in the reported earnings and has revised and also extended S&P's forecast of this data through the end of 2010. The chart below shows the data as available on 29 January 2009: 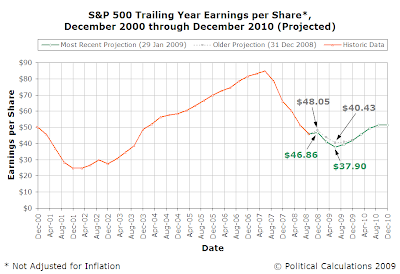 The good news, such as it is, is that the timing of the bottom for S&P 500 earnings is still projected for June 2009 and that the ongoing erosion of corporate earnings would appear to be slowing. S&P is now projecting the bottom of earnings to come in at $37.90 per share in September 2009, down from their projection of $40.43 per share just one month ago. Meanwhile, earnings per share are still anticipated to come in at roughly $42 per share in December 2009.

Meanwhile, we see evidence that the price per share of the S&P 500, as measured by the average of its daily closing prices during each calendar months, may already be near their bottom. We'll have more information on what we're seeing later this week, but for now, here's our view of the index' value vs its trailing year dividends per share through January 2009: 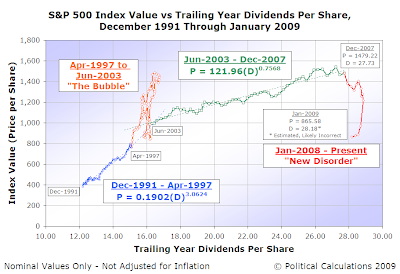 For now, we're using an estimate of the index' first quarter dividends per share that will likely prove to be incorrect. We'll hopefully have a more firm estimate by the time we revise the data for our signature S&P 500 at Your Fingertips tool later this month.