Just a quick aside, here's Greg Mankiw just a short while ago:

The Economix blog offers up a simulation that alleges to show a roller coaster ride "whose track charts the Dow Jones industrial average from October 2007 to March 2009."

But that can't be right. Stock prices are approximately brownian motion, which means they are everywhere continuous but nowhere differentiable. In plainer English, "continuous" means that stock prices an instant from now, or an instant ago, are close to where they are now. But "not differentiable" means that the direction they move over the next instant is not necessarily close to the the direction they were heading over the last instant. A roller coaster with that property would be quite a ride.

Since at least January 2008, stock prices moved away from approximating Brownian motion to instead follow more of a Lévy Flight. The charts below demonstrate the difference, with generic Brownian motion shown on the left and Lévy flight on the right (here's our post where we originally presented these non-stock market-related charts):

As for being "quite a ride," we'll agree with that, especially if you take a ride on our model of the roller coaster: 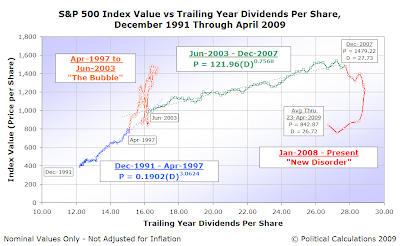 If you think this is math geekery, you ain't seen nothin' yet! Michael F. Martin over at Broken Symmetry has also taken note of this discussion, and makes a very good note about the nature of Lévy processes while adding a whole new angle to describing how the market is behaving: an inhomogeneous Poisson processes!

But, if you're not quite ready to throw Lévy processes out with the bath water, you might consider Andrzej Palczewski's and Emilia Rudzka's Truncated Levy flights on Warsaw Stock Exchange, which argues that truncated Lévy flights can be rather simply adapted to account for the observed asymmetry in the distributions of returns in a stock exchange, which tend to not only have "fat tails" compared to a normal Gaussian distribution, they also tend to have one tail be fatter than the other.

We'll stop there since detailed technical discussions of this kind of stuff makes our own eyes glaze over....