Political Calculations
Unexpectedly Intriguing!
27 May 2009
Scaring the Holy Bejeebus Out of Investors As an investor, should you panic that stocks have become overvalued, at least as measured by Robert Shiller's P/E10 ratio?

And now, aside from being more than a pain to calculate, the P/E10 ratio is apparently indicating that stock prices have reached their long-term average, suggesting that they're now fully valued and that if stock prices continue rising higher, they'll be over-valued. Via King, Jason Zweig writes in the Wall Street Journal:

Stocks have suddenly become more expensive to accumulate. Since March, according to data from Robert Shiller of Yale, the price/earnings ratio of the S&P 500 index has jumped from 13.1 to 15.5. That's the sharpest, fastest rise in almost a quarter-century. (As Graham suggested, Prof. Shiller uses a 10-year average P/E ratio, adjusted for inflation.)

Over the course of 10 weeks, stocks have moved from the edge of the bargain bin to the full-price rack. So, unless you are retired and living off your investments, you shouldn't be celebrating, you should be worrying.

Really? Should you? And what kind of advice is that, anyway? If you're retired and living off your investments, shouldn't you be the most concerned that they're overvalued?

What if we told you that we know for an absolute certainty that the dreaded P/E10 ratio is going to rise higher than the chart to the left (HT: Doug Short) says it is today. A lot higher. Your stocks will be totally overvalued by this measure, quite possibly for the next ten years! Are you through celebrating yet? Are you ready for the stress of ten whole years worth of worrying?

How do we know? Simple! Being practioners of the dark art perhaps best known to the public as "math," we know that there are two ways that we can make any ratio, which are really just fractions, grow really large:

While stock prices have risen in recent months, they're pretty much doing exactly what we would expect them to do, so we really can't get all worked up into a rabid lather by being scared by them being "too high." No, we'll instead turn our attention to the denominator and take a closer look at what might be going on there. 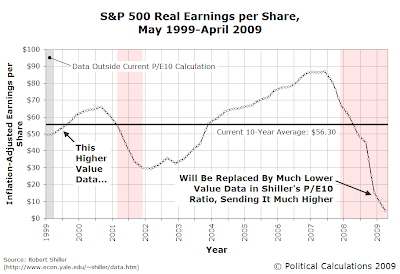 As it happens, what's going on there is that the denominator is getting smaller. In fact, it's going to be getting smaller at a lot faster rate than the numerator is likely to grow larger. Why is that? Well, let's consider the period of time that Shiller's ten-year inflation-adjusted earnings per share is spanning as it has risen and fallen over the past ten years, which includes:

And that shrinking denominator means that the P/E10 ratio won't just rise, it will rise well above it's long term average. Really, the only thing that could keep the P/E10 ratio down at reasonable levels given these circumstances is if stock prices rise fall at least as fast, or faster if we want this ratio to drop to a "safe" and "worry-free" level.

But will they? That's unlikely given that CEOs were throwing everything including the kitchen sink into jacking up their bad earnings numbers for the sake of getting as much bad news out at a time when every other CEO was doing the same thing, providing really nice cover from their shareholders.

Either way though, as a Zweig-style panicky investor, the good news would be that the P/E10 ratio would then be low enough to not have to worry about your portfolio being overvalued!