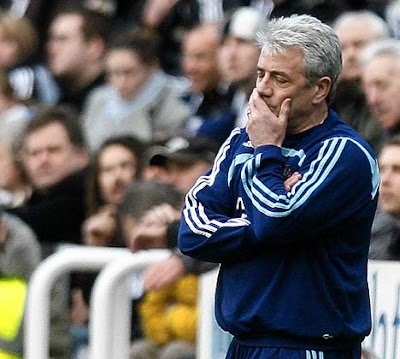 If your organization is going through rough times, how beneficial would it be to replace the boss?

If the findings of research into the sacking of managers in the English Premier League holds, the answer is "not very." Especially for those organizations that might change managers frequently in pursuit of the tremendous rewards of having been elevated into the Premiership, perhaps the most lucrative football (soccer) league in the world (HT: Physorg):

The average tenure for a Premiership manager is now 1.38 years, compared to 3.12 years in 2002, with many departures attributed to the fear of relegation to the Football League Championship. This can create a revenue gap of £56- £70 million, according to figures from Deloitte.

Research shows that because of this, there is immense pressure on managers to succeed in the Premier League, with poor results typically resulting in a scapegoating reaction by sacking the manager. Scapegoating theory holds that changing managers will not affect performance and is simply a ritual to apportion blame.

Mat Hughes, one of the researchers, identifies the loss of specialized knowledge as the primary reason why organizations should seek to avoid firing a manager as a primary response to the organization's poor performance:

"The research leads us to question how effective sacking a manager really is to teams. Getting rid of the manager means clubs lose a lot of tacit knowledge and although the new manager will quickly change things, those changes might not be the best or right ones.

"Football managers forever state that they need more time in the post to have an effect and our findings show there is much truth to their arguments. It takes time for the managers to reshape the team, its infrastructure, the scouting network, learn about players and the opposition. One of the dangers is that sacking the manager, and the almost inevitable rotation of the coaching staff that goes with that event, causes a lot of important knowledge about the team's strengths, weaknesses, preferences and capabilities to be lost. While the new manager comes in and will quickly seek to reshape the team's style and tactics to suit the new manager's preferred style and ways of doing things, that initial 'shock' does seem to jolt performance away from the rate of decline seen previously.

Aside from the loss of accumulated expertise, the danger of frequently replacing managers is that this action does not necessarily address other problems that exist within the organization, which might instead account for much of the organization's performance issues.

Paul Hughes, another of the researchers, addresses this point:

"Clubs who chop and change their managers — often with no opportunity for the manager to implement real change — tend to experience a long-term downturn in results, even if they have initially experienced success following the appointment of a new manager.

"Our findings suggest that sacking a manager often deflects from the real underlying issues at clubs, which need to be addressed before continuity and success will be achieved."

And there lies the rub, as it is a lot easier to change the coach than it is to do what it takes to fix a broken institution. Especially when the institution knows it only has to outlast the boss.