Do you remember the "Extreme Makeover" show on broadcast television several years ago? If not, and we totally understand if you don't, here's the basic premise from Wikipedia:

Extreme Makeover was a television program from ABC in which individuals volunteer to receive an extensive makeover in Hollywood. It began airing in 2002 on Thursday nights at 8pm. A total of 55 episodes were produced. The show's first surgeon was Dr. Garth Fisher of Beverly Hills, California; he was part of the original "Extreme Team" of the first six episodes, along with Dr. Bill Dorfman and Dr. Robert Maloney. Other doctors were selected for the next three years in addition to the above.

Borrowing heavily from the reality television genre, the show depicts ordinary men and women undergoing "extreme makeovers" involving plastic surgery, exercise regimens, hairdressing and wardrobing. Each episode ends with the subjects' return to their families and friends, showing the reactions of their loved ones, who have not been allowed to see the incremental changes during the subjects' absence.

We recall that the show featured many people with hard luck stories, which became pretty unwatchable over time as the trend toward more and more maudlin stories became evident. We weren't alone in our assessment:

In its first season, Extreme Makeover ranked 40th in the yearly ratings and averaged 11.2 million viewers per episode. However, viewership suffered huge drops over the next three seasons.

On May 15, 2007 Extreme Makeover was officially canceled by ABC. 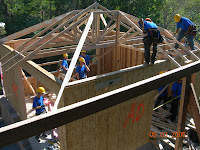 And that was a good thing. Fortunately for ABC, the show provided the launching point for a spin-off that became much more successful: Extreme Makeover: Home Edition, which features Ty Pennington and his merry band of home decorating elves as they travel the country in search of people who are willing to exchange their maudlin tales in return for having Ty and the gang destroy their clunker homes and replace them with McMansions filled with the latest home appliances. Or increasingly in recent years, "green" McMansions filled with the latest "green" appliances.

We're not knocking ABC or the show at all. We find it fun to watch the cast's creativity in action.

But we can't help seeing parallels between what the show does and the government's unsuccessful "Cash for Clunkers" program. Here we are, after all, seeing a relatively small group of people within a community receive a lot of largess on the behalf of a lot of others, most of the benefits of which aren't shared by the others in the community who worked to provide them.

Even in the cases of the "green" homes, which might be very energy efficient compared to other homes of their size, but which we suspect consume far more energy than the clunker homes they replaced. Anecdotally, a number of Extreme Makeover: Home Edition projects have gone into foreclosure in part due to their higher utility bills:

The hit reality TV show, Extreme Makeover: Home Edition is in its sixth season on ABC. The show that rebuilds homes for families that are struggling or in the grips of hardship is being criticised once again as another family who was featured on the show is in foreclosure.

Eric Hebert had to put his home up for sale last year because he couldn’t keep up with the utility bills and the fact that the economy had become so dismal. The 3,678-square-foot home was listed for $529,000 in May 2008, when EricHebert firstput it up for sale, but the current asking price is $449,000, according to its listing on the Tomlinson Sandpoint Sotheby’s International Web site.

The obvious parallel between this outcome and the "Cash for Clunkers" program comes from our previous analysis of the likely higher fuel consumption of the new vehicles over the clunkers that were traded in. We found that while the new vehicles are more fuel efficient, they're very likely being driven far more than the clunkers were being driven, which means that the program's environmental benefits are negative.

What brings all this up is that we happened across an article by Kate at The Paycheck Chronicles where we were surprised to find that the government does indeed have its own home edition of the "Cash for Clunkers" program. Unsurprisingly, it was included a economic stimulus bill.

Here, she describes how taking advantage of the energy efficiency tax credit provided required her to spend far more than she originally planned to get the maximum benefit:

I've been planning on replacing some of our windows before the end of the tax year, because they are 45 years old and also because of the tax credit for energy efficiency. This tax credit provides a 30% tax credit, up to $1500, for the replacement of windows, doors, insulation, roofs, HVAC systems, hot water heaters, and biomass heaters. I did the math and figured that the tax credit maxes out $5000 worth of windows. (I'm smart, huh?)

We replaced a few windows before and so I knew approximately how much it was going to cost. I figured out which windows are most important (we have a ton of windows in this house) so that I would spend just over $5000. The tax credit is good for the 2010 tax year, too, and by saving a chunk of the windows for next year, we'll maximize the tax benefit and we'll have time to save more money to pay for the improvements.

I called Rudy, my window guy, and asked him to come by so we could organize the project. He mentioned the tax benefit and then said that I would need to spend around $7200 to maximize the tax benefit. Huh? That doesn't sound right. It turns out, the credit is only available on the materials, not the shipping or the installation. I hoped for a minute that Rudy was wrong so I looked it up. He was right (after all, he is the window guy.) The credit is good on the price of the windows only. And around $5000 worth of product ends up with a total bill of about $7200 if you are having them installed by someone else. When Rudy did the actual calculations, he provided me with the portion of the bill that was tax deductible along with some information that will be required to prove that they are eligible windows.

Following the "Cash for Clunkers" program's expiration, auto dealers have seen a dramatic drop in sales. We wonder if that same outcome might not be in store for the home improvement industry once these tax credits expire in 2010, or for that matter, the struggling home building industry at large, where a tax credit of up to $8,000 for first time home buyers is set to expire on 1 December 2009.

Is it any wonder then that home builders are actively seeking an extension of the first-time home buyer tax credit? Especially if the alternative is seeing their current stimulated sales levels fall off the edge of a cliff?

And we're left wondering if a real economic recovery can be built by industries that would appear to have developed an addiction to economic stimulants. An addiction that requires a never-ending supply.

Regarding Cash for Clunkers

About the Government's Economic Stimulus Programs in 2008 and 2009