One of the trends we've noted in the world of commercial turkey evolution in past years is the one toward producing ever bigger birds, which we've humorously called the turkey industry's (aka "Big Turkey's") "Super Turkey" project.

But something happened in 2008 to reverse the growth trend we've observed toward the ever meatier Ready-To-Cook (RTC) turkeys that American consumers are most likely to encounter in their local grocery stores and megamarts. The turkeys got bigger in 2008, but they didn't get any meatier. 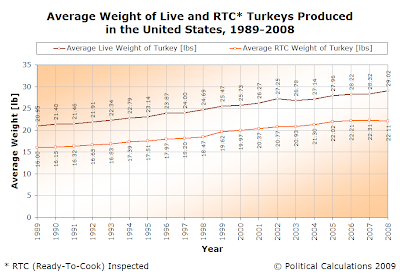 The proof of that observation is found in the National Turkey Federation's statistics. Here, we extracted the data for the Total Pounds of Turkey Produced from 1989 through 2008 to create a chart showing the trends for the average weight of both live turkeys and the average RTC weight during that time.

What we find in the latest data is that the average live weight of U.S. produced turkeys reached a new high in 2008, but that the Ready-To-Cook weight dropped for the first time ever since our available data records begin in 1989. We see that the average live weight of a U.S. turkey has climbed to 29.02 pounds, a 2.5% increase over the figure for 2007, but that the RTC weight declined by nearly 1% to 22.11 pounds in the same year-over-year period.

More than that, the drop in the RTC weight of turkeys produced in the United States was large enough to erase the gains realized in the yield of turkeys in both 2006 and 2007.

We have a hypothesis for how that might have happened.

In late 2007, petroleum prices in the U.S. were on a sharp upward trend, which continued well into 2008. In response, the U.S. government expanded the subsidies it provides from taxpayers to ethanol producers who cranked up their production, seeking to reduce the price of gasoline by substituting a larger portion of it with price subsidized ethanol. Motivated by the easy profits created by increased taxpayer subsidies, U.S. ethanol producers then scoured the available U.S. corn crop to support their increased rate of production.

That's significant because while ethanol is more efficiently produced using sugar cane, in the U.S., ethanol is more economically produced from corn thanks to the country's high tariffs on imported sugar, which double what U.S. consumers must pay for sugar above the world price for the commodity. 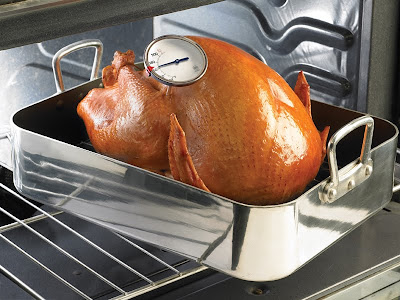 Going back to our story, that subsidized surge in the quantity demanded for corn to support the increased production of subsidized ethanol also significantly increased the price of corn. That increase in price was felt by every other consumer of corn, including turkey producers who use the grain to feed their birds.

Seeing as turkey production has fairly low profit margins, turkey producers reacted by substituting other less expensive types of feed for a portion of the corn they would otherwise have used, needing to satisfy consumer demand for the number of turkeys they would produce. We suspect that less expensive feed resulted in larger turkeys, but with a lower yield of meat as compared to purely corn-fed birds.

That would also explain a good portion of the increase in price we've observed from 2008 to 2009. While the number of turkeys produced has increased, their RTC weight per turkey has declined, which suggests the relative supply of turkey meat available for consumption has decreased (as RTC turkeys have become skimpier) while the quantity of turkeys demanded by consumers has increased.

And that would be why frozen turkeys have outperformed gold as an investment over much of 2008 and 2009.