Having now created a tool for estimating how many federal employees will fall within a given range of income for 2010, we thought we might go the extra mile and show approximately how many of the U.S. government's two-million strong civilian labor force fall into each $100 interval from $0 through $300,000.

Our chart visualizing the distribution of federal employee salaries for 2010 is below: 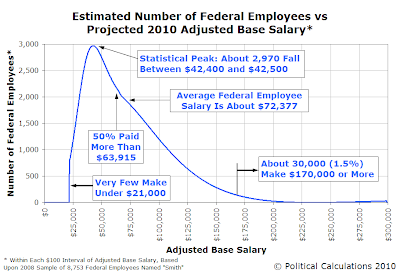 We find that very few employees of the federal government are likely to make less than $21,000, while the greatest concentration will be clustered between $42,000 and $43,000.

But the real question is how many federal employees will actually make $170,000 or more in 2010. If there is a significant difference between the actual figure and our projected figure of 30,000, that would be an indication that the federal government's pay scales are being significantly skewed to favor its top paid staff.

After all, with just a 0.8% difference in the inflation-adjusted value of a U.S. dollar between 2008 and 2010, the large, progressively greater rightward shift in the distribution of the upper echelons of income for federal employees between 2008 to 2010 indicates a rather significant increase in the income inequality of both the federal government's employees and the United States. 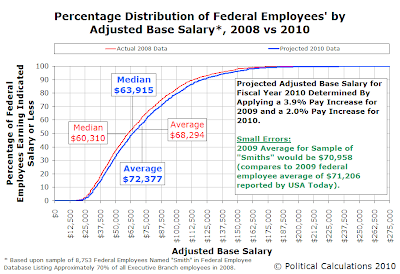 Who knew that the federal government's high salaries and regular raises were such a contributing factor to a perceived problem that former Federal Reserve Chairman Alan Greenspan described as a "disturbing trend"?!