Welcome to 2010! Believe it or not, we're going to be breaking news today.

Normally, our New Year's tradition is to post a tool that you can use to see what your paycheck will look like during the course of the next year, while poking some fun at the IRS or the more questionable expenditures of taxpayer money that come out of Washington D.C. This year is no exception where the first part of our tradition is concerned, as you can use our federal tax withholding tool for 2010 to quickly find out what your paycheck will look like, at least, without any state or local income tax withholding, for a wide range of factors that might affect the amount of money that you can actually use.

However, in doing the work to create this year's edition of our long-running series of paycheck estimating tools, we uncovered something we didn't expect to find in developing the code for this year's tool.

Update 6 January 2010: We've replaced our original analysis after discovering an error in our charts showing the differences between 2009 and 2010's withholding rates for single and married individuals. That original analysis now appears at the bottom of this post, and is fully superseded by the analysis that follows.

Here is what we found in how withholding tax rates have changed from 2009 to 2010, in graphical form: 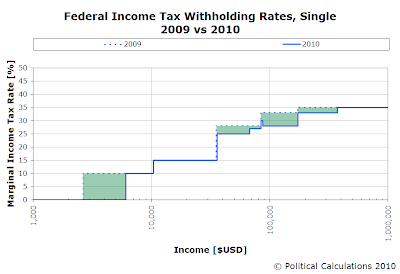 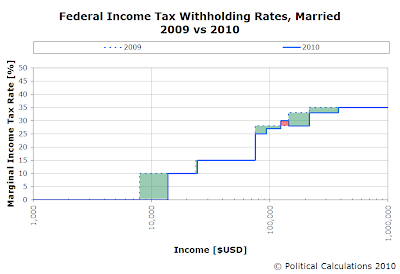 What we find is that for the first time that we can ever recall, withholding income tax rates have been made regressive. What that means is that some individuals with lower incomes are having taxes from their paychecks withheld at a higher rate than individuals who earn higher incomes.

It seems extremely odd in both cases for the federal government's income tax withholding to be set up this way. It's simply bizarre.

Update 6 January 2010: SusanAnne Hiller explores the bizarreness of it all.

About the 2010 Paycheck Estimator

Political Calculations' 2010 Paycheck Estimator will determine the amount of U.S. Federal Income, Social Security and Medicare taxes to be withheld for wages and salaries earned in 2008, as determined through the percentage method outlined in the IRS's Employer's Tax Guide (Publication 15 Circular E, which is available online.)

The paycheck estimator also takes into account the amount of pre-tax 401(k) or 403(b) plan contributions you make as well as your pre-tax flexible spending account contributions for health care and dependent care expenses before figuring the amount of taxes to withhold.

There are other paycheck calculators like this on the Internet, including the superior tools available at PaycheckCity.com. We really like PaycheckCity's tools because they allow you to determine the amount of state income tax withholding that will be taken out of your paycheck in addition to what the federal government takes.

Then again, if you live in one of the nine states that have no personal income tax (Alaska, Florida, Nevada, New Hampshire, South Dakota, Tennessee, Texas, Washington or Wyoming), our 2008 Paycheck Estimator will provide you with a very good estimate of your actual take-home pay. We'll note that both New Hampshire and Tennessee both tax dividend and interest income, which doesn't affect your paycheck, but might influence your withholding decisions - especially if you plan to overwithhold your federal taxes as a way of saving to cover what you might have to pay for state taxes.

Did you ever wonder what your paycheck would have looked like in previous years? Our archive of tax withholding calculators can show you!

Original Commentary: Our original commentary is below. Portions of the analysis are still valid, however there were several errors in the original version of the charts, for which our reliance upon them for our analysis resulted in some incorrect conclusions.

The portions of our analysis that are still valid are shown in black typeface, while the incorrect portions are shown in a gray typeface. The original text below would begin where the 6 January 2010 update appears in the text above.

Something that allows us to answer a question that we had not previously thought to consider.

Politically speaking, who are the most important people in the United States, at least as far as the current U.S. president and the majority party in the U.S. Congress are concerned?

As the first step to answering the question, let's ask it again a bit differently. Which people, according to their annual income, do Barack Obama and the members of his party in the U.S. Congress believe to hold the key to their being able to retain political power in the next national elections?

We found the answers to these questions because they went to the trouble to give some very select groups of people a very special break on the amount of money that they'll have withheld for income taxes from their paychecks in 2010. So special that for the first time that we're aware of in the entire history of federal income tax withholding in the United States, one of these select groups of people will get to pay an explicitly lower tax rate on their earnings than those who earn just a little less money than they do. In effect, the often-championed idea and long-standing practice of progressivity for income taxes has been overturned for this year's income tax withholding.

Let's show you what we mean. Our first chart compares the federal income tax withholding rate schedule between 2009 and 2010 for individuals who file as Single, as determined by the percentage method in IRS Publication 15. Since there was very little inflation to affect withholding allowances (set at $3,650 for both 2009 and 2010) and taxable income thresholds for the various tax rate brackets from 2009 to 2010, all the changes we observe in this chart, which we've shaded in green, are the result of actions implemented by both the U.S. Congress and President Obama in 2009.

What we find are some very remarkable deviations from the progressive withholding tax structure of the previous year:

We see similar dynamics for income earners who file their federal income taxes as Married. Our next chart looks at the differences between 2009 and 2010 for these individuals, which we've summarized below:

Who Benefits from These Changes?

These year-over-year changes tell us quite a bit about President Obama and his party's favored income earners. Starting with the large changes we observe for the lowest income earners, whose top marginal tax withholding rate will drop from 15% to 10% 10% to 0% in 2010, and calculating the approximate distribution of single and married (filing jointly) taxpayers by filing status given by the IRS' Individual Statistical Tables by Size of Adjusted Gross Income for 2007, we would estimate that 5.5 Single households stand to benefit, while only 1.7 million Married households will do so. Assuming each of these low-income Married household consists of two adults, we find there are 1.6 times as many Single tax filers benefiting from these lowest end tax withholding changes in 2010 as there are Married tax filers.

We find then that the change in withholding income tax rates at the lowest end of the income spectrum would seem designed to disproportionately benefit people who are single rather than married. We note that this would seem to benefit the Democratic Party, which in addition to its base of support from low income Americans, also enjoys a strong affinity with those who are single rather then those who are married. As a result, the candidates of the Democratic Party are much more likely to benefit at the ballot box from having put more money in the pockets of these core supporters throughout the year.

The principal factor driving this particular change from 2009's original withholding requirements is the "Making Work Pay" tax credit, which was enacted as part of the 2009 "economic stimulus" bill.

Who Benefits from the Regressive Tax Withholding Rates?

This would have been a neat bit of analysis if we hadn't messed up in showing what marginal tax rates apply to various income levels in our original charts. The new analysis section we provided above this original text fully supersedes this section, as the conclusions drawn are dependent upon the errors in those charts.

The income range for the regressive withholding tax doesn't seem to make much sense at first. Checking the demographics as we did with low income earners, we find that there about 6.8 million married households between the $94,050 and $124,050 income thresholds which have been designated for the regressive portion of the 25% withholding income tax rate, while there are only 2.8 million single households in the regressive rate portion of 2010's withholding tax schedule for singles between $67,700 and $84,450. At a ratio of nearly 2.4 married households to single households, or 4.9 married individuals for each of the single individuals, the demographics for party affiliation wouldn't seem to apply. 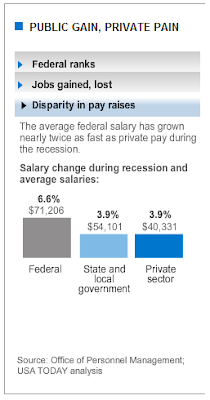 So how might that benefit President Obama and his political party?

The answer to that question lies in the expected large expansion of the federal workforce and the very high degree of union representation among federal government employees, as well as the relative percentage of campaign contributions provided to Democratic Party candidates from these unions. In 2009, 37.5% of all federal, state and local government employees were members of labor unions. Of that number, approximately over 28.1% of the federal government's civilian workforce, or roughly 562,000 out of a total of some 2 million employees, were represented by labor unions. By comparison, union members make up just 7.2% of all 138 million plus workers in the private sector. 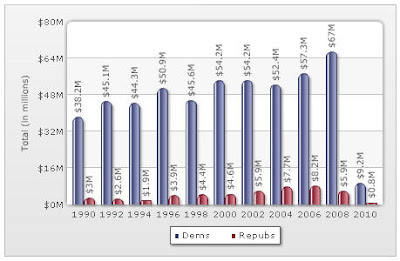 But that's nothing compared to their political contributions. The Democratic Party outpaces the Republican Party by a nearly 10 to 1 margin with respect to the contributions it receives from political action committees affiliated with labor unions. Our thinking is that the regressive tax withholding that Barack Obama's administration has constructed in the 2010 withholding tax schedule is specifically designed to benefit these individuals, a good portion of whose union dues will be redirected to his political party's campaign coffers.

We would predict that it's going to be a pretty nasty election year.