"I was hopelessly wrong on house prices. Ask me how!"

That's the slogan of the t-shirt economist and blogger Steve Keen will be wearing as he walks 139 miles (224 kilometers) from the Australian national parliament building in Canberra to Australia's tallest mountain, Mt. Kosciusko, which he plans to do from 15 April 2010 through 23 April 2010.

But the real story is why he'll be making that trek while wearing that T-shirt! ABC's Michael Janda reports:

Associate Professor Keen from the University of Western Sydney famously made a bet with Macquarie's interest rate strategist Rory Robertson during the middle of the financial crisis.

According to Professor Keen in an interview with the ABC's economics correspondent Stephen Long in September last year, the bet was in two parts.

The second part was a wager that house prices would be the same or lower as in September 2008 by the end of 2009.

The official ABS index of capital city house prices was at 131 at the time.

Instead, according to the RP Data-Rismark index, capital city house prices surged 11.5 per cent over the 2009 calendar year, and the ABS index showed a 13.6 per cent jump in median house prices between December 2008 and December 2009.

That has left the ABS capital city house price index at 141.8 in December 2009, which is why Professor Keen will be walking 224km.

Mr Robertson has a different take on the bet.

"The fact that the downtrend in house prices underway in 2008 ended within a few short months of the bet being agreed - rather than 10-15 years down the track, and with prices then rising to new highs within a year - simply highlights how hopelessly wrong Dr Keen was about the outlook for house prices."

So how hopelessly wrong was Keen? To find out, we'll apply our newly developed analytical method for visually determining whether housing bubbles have formed at the national level to Australia's recent history, but first, here's how Wikipedia describes the so-called Australian property bubble:

In 2003, the IMF gave a prescience warning that “housing bubbles in Australia, England, Ireland and the United States” would “burst”. [8] The IMF again warned in 2009 that Australian house prices were overinflated by between 5 and 15 percent.[9] Since that warning, prices have climbed another "10 per cent" in 2009 according to reports.[10]

As of February 2010, Australia has thus far proven to be the only exception to the 'bursting property bubble phenonema'. However, as in the case of the bursting of the Japanese asset price bubble (land and share market), deflation starts gradually, but once started, has a momentum all its own.

Wikipedia also provides a basic timeline for the Australian property bubble from 1998 through January 2010. We obtained Australian median income data for the overlapping calendar years of 1996-97 through 2008-09 from the Australian Bureau of Statistics and ABCDiamond.

For median house prices, we used the median price of established houses sold provided by the Australian Parliament for the years 1986 through 2006, which we augmented with data for 2007, 2008 and 2009 from the Real Estate Institute of Australia. 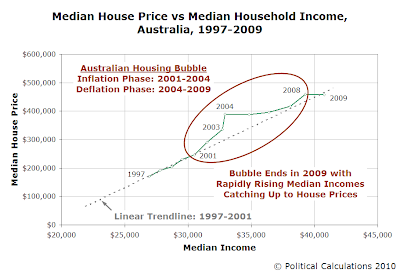 Plotting the median house prices against the median incomes perhaps best illustrates why Keen's short-term prediction for housing prices for the country was so far off the mark.

What we see is that housing prices followed a linear trend line from 1997 through 2001, when housing prices decoupled from their established fundamental relationship with Australian incomes.

From 2001 to 2003, it appears that housing prices began to follow a new linear trend, which terminates with a sudden rise in median housing prices in 2004 without a corresponding increase to median incomes. This sudden break suggests the presence of an economic bubble potentially forming in Australia's national housing market in that year.

The presence of a housing bubble is confirmed as we find that median house prices stalled out while median incomes rose in the years that followed, eventually beginning to rise again with median incomes in 2008. As of 2009, we find that Australia's housing prices are approximately at the linear trend line established in the years from 1997 through 2001. With housing prices in Australia now rising, we find it likely that the bubble may have completed its full cycle, with housing prices appearing to have fully completed a housing bubble's phases of first inflating, then deflating with respect to incomes.

For his part, Steve Keen seems to be taking losing his bet with Rory Robertson in stride, having launched a web site to promote it and to raise money for a charity benefiting Australia's homeless.

For our part, we think our chart above would make for a good T-shirt design to go with the slogan!