February 2010 saw some improvements in employment with surprising demographic beneficiaries for the month: young adults and teens! 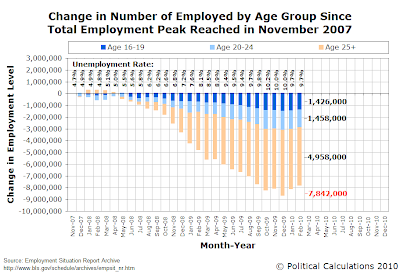 These figures are especially significant given that the percentage share of young adults within the whole U.S. civilian labor force is just 9.0%, while teens account for just 3.2% of all U.S. workers. Both percentage shares represent a slight increase over the all-time lows recorded in January 2010.

With no additional increases in the federal minimum wage scheduled to take place in the near future, we would now anticipate that teens and young adults will now disproportionately benefit by taking a disproportionately larger share of newly filled jobs as compared to older workers.