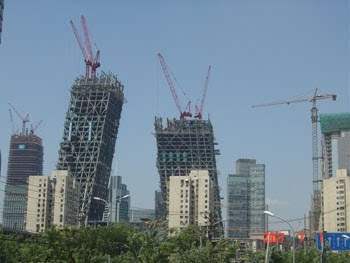 There's a lot of speculation that China is currently undergoing a housing bubble. Since we recently developed the analytical tools needed to conclusively make that kind of determination for a nation, we applied them to look at China's situation. What those tools suggest is that China's housing market is actually responding directly to larger economic forces at work in its economy, and as a result, we find that China both does, and does not, have a housing bubble.

Here's what we mean by that. By our definition, a bubble may be said to exist whenever the price of an asset that may be freely exchanged in a well-established market first soars, then plummets over a sustained period of time at rates that are decoupled from the rate of growth of the income that might be realized from owning or holding the asset. So, for an asset like a house, we would say a bubble exists if, over a period of time, we saw its price first sharply rise, then fall with respect to the income that might be earned from simply renting the house.

By contrast, if order exists in a housing market, we will see a close coupling between the values of housing prices and rents over time.

What we recently discovered is that we can substitute income for rent in assessing whether a bubble has formed in a housing market. Since income data is much easier to find for nations than rent data, we've been able to apply our new analysis technique to the recent history for the housing markets of the United States, England, Canada and Australia.

As it happens, it is extremely easy to determine if something is amiss in a nation's housing markets. When order exists, we find that housing prices follow a consistent straight line trajectory with respect to income over time. We can then easily determine when something has happened to affect housing prices by observing when housing prices deviate from their normal linear trajectory. 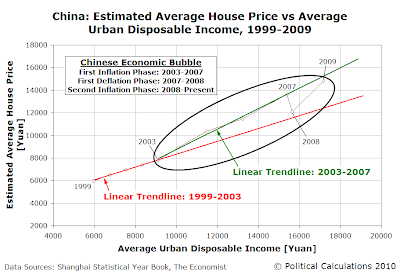 We see that a very close coupling between housing prices and disposable income existed at least from 1999 through 2003. However, in 2003, we observe a large deviation from that established trend as housing prices began following a new linear trajectory, which continued through 2007.

What that observation tells us is that something happened, most likely in late 2003, to set housing prices on a higher growth rate trajectory with respect to the growth of income. Since that new trajectory is linear, we find that housing prices were driven upward by a change in overall economic conditions, which suggests that China's housing market was not in a bubble.

That observation is contradicted by what we see next. In 2008, housing prices plunged while average disposable incomes were barely changed. This outcome suggests that a bubble existed in the Chinese housing market from 2003 through 2008.

Finally, in 2009, we see both housing prices and disposable incomes surging upward, as the Chinese economy responded to its government's massive stimulus programs initiated in reaction to the worldwide economic crisis of 2008.

What we would hypothesize from these observations is that whatever bubble exists in China extends far beyond the nation's housing market, which has actually responded rationally to those conditions. We would then conclude is that what China has really been dealing with is an economic bubble that extends across many sectors of its economy. We also find that the rapid resurgence of housing prices in 2009 suggests that China may now have formed a true housing bubble in addition to its overall economic bubble.

Like all economic bubbles, they will end. It's just a matter of when and how.