According to documents filed with the SEC in February 2010, 2009 marked another grim milestone in the accelerating decline of the New York Times. Having already seen its weekday circulation drop below one million for the first time in decades earlier in the year, we can now confirm that the New York Times has now lost more than half its Sunday circulation in its home 31-county market in New York since its circulation levels last peaked in 1993. 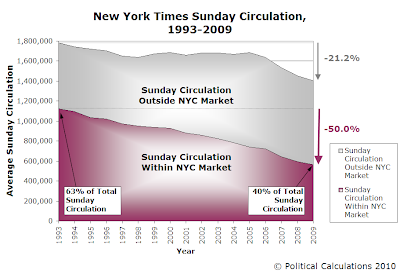 The table below, taken from the New York Times' SEC filings for its annual reports from 1993 through 2009 for its Sunday circulation data provides the hard data presented visually in the chart above.

Looking at the New York Times' total weekday circulation, we confirm a sharp decline has taken place in 2009, with the newspaper's total circulation now 18.9% below its 1993 peak value. In 2008, that percentage loss of peak circulation stood at just 12.6%, which makes 2009 the single worst year for the weekday newspaper's fortunes on record. In historical terms, the New York Times' 31-county home market circulation of 422,048 in 2009 has dropped below the daily circulation figure of 450,000, which marked the low end of the range the newspaper successfully maintained during the years of the Great Depression. 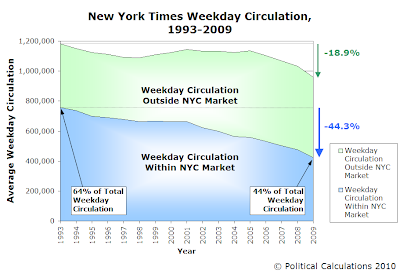 We've summarized all the annual data for the New York Times' Sunday edition circulation that was presented in the chart above in the table below. Clicking the "Year" links provides the relevant NYT's SEC filing for the indicated year, from which we obtained the newspaper's circulation data, which is reported in the section of the annual report in which the company's management discusses its business:

Given these dramatic declines and the indications provided by the company's senior leadership, we would predict that even more layoffs of newspaper staff will be seen in 2010, despite what the newspaper's own senior management indicated just three months ago and its reported profit in the fourth quarter of 2009.

Disclosure: Ironman does not hold any positions in the New York Times (NYSE: NYT).