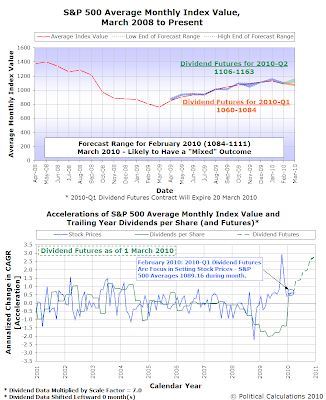 One way or another, investors can expect a significant shift to occur in the stock market in March 2010.

The reason why has to do with the dividend futures contract for the S&P 500 that applies for the first quarter of 2010, which is set to expire on 20 March 2010.

That's significant because it has been the changes in the expected future growth rate of the S&P 500's dividends per share as charted by the value of this futures contract that has fundamentally driven stock price levels during much of the last year. More specifically, the changes in dividend values covered for the period of time covered by this specific futures contract have been the driver of stock prices in every month but one from April 2009 until now.

But it hasn't run its course yet. As a result, we're offering a split forecast for the S&P 500 this month, and will observe that the actual outcome in stock prices will be a blended result as investors are compelled to shift their focus from the first quarter of 2010 to another dividend futures contract further in the future.

At present, there are only three others to choose from, which cover the second (June 2010), third (September 2010) and fourth (December 2010) quarters of 2010. The table below presents what we would forecast for where the average of the S&P 500 will be in March 2010 would be if the expectations indicated by each contract were the sole driver of stock prices during the month:

No matter what, it is unlikely that we will be able to confirm which point of time to which investors will have shifted their focus toward during this month. Given that we're beginning the month with the focus still on the 2010-Q1 period, stock prices for the month will be the result of blending this period with one of the other future options for which we have data.

But when that will be, we do not yet know. And until then, stock prices will be the prisoners of the ticking clock.