Do you remember back on 12 April 2010, when the Obama administration was trumpeting how much better the expected budget deficit for 2010 was going to be? When, magically, the White House's Office of Management and Budget's projection of the expected deficit dropped by just over $300 billion U.S. dollars from its originally forecast value of $1.6 trillion dollars to $1.29 trillion dollars?

We thought it might be fun to show how that forecast compares with how the Congressional Budget sees the deficit future in the United States, comparing what they had forecast in 2009 against what they're now forecasting for 2010, based on the year-over-year changes driven by what might best be described as a spending spree-for-all. The chart below reveals what we found: 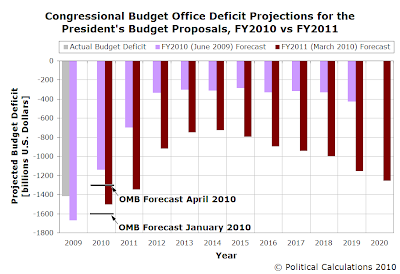 What we find is that compared to what the CBO had projected back in 2009 for 2010, President Obama's OMB newly-reduced forecast for 2010 still represents a nearly $149 billion dollar increase in the projected deficit for the year. So much for that claimed $300 billion reduction in the annual deficit for 2010!

Yes, Virginia, the taxes you'll pay over your lifetime will be going up way more than you might ever have thought. That's something you can believe in!