Political Calculations
Unexpectedly Intriguing!
18 May 2010
Comparing the Crashes of 1987 and 2010

Barry Ritholtz asks if a repeat of the 1987 crash is impossible or likely. He looks at the market now and then (Update - see note below the post) before concluding:

The key differences have nothing to do with who was quoted, or the articles authors or their editors. What had changed was the psychology of the moment. And THAT, more than anything, impacts how people perceive the world . . .

Looking at the 1987 Black Monday crash a bit differently, that's exactly correct, although we find fundamental reasons for doing so, both then and now. We think that the current state of the market is such that it's more reminiscent of the 1930s than 1987 - especially since April, when the future expectations of investors appear to have sharply shifted downward, for which we don't yet have the data to confirm if that apparent shift in sentiment is a reaction to a change in the fundamental outlook for the market or is simply the result of noise. Our thinking is that it's more fundamentally driven. 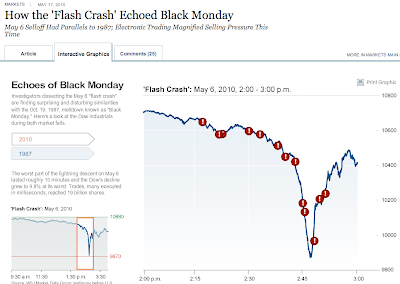 Here's why. The May 6 plunge is a clear, almost perfect example of a disruptive noise event in the market - a dramatic change in prices that isn't sustained and that is not correlated with changes in the expected growth rate of dividends per share. The combination indicates that the so-called "flash crash" qualifies as being the result of noise in the market.

That the market recovered quickly to the level indicated by where the apparent investor future expectations for dividends would place them, neither going significantly higher or lower, despite the free and clear opportunity provided by the flash crash to do so, would seem to confirm that observation.

Instead, how the market is currently acting suggests that something fundamentally altered the future outlook of investors in a way where they now expect the level of dividends per share in the market to fall significantly from their current levels at some, as yet unknown, point in the future, which is why stocks may be expected to continue trending lower in the near term.

What we know today is that shift in outlook took place in April 2010. What we don't yet know is to what future point in time investors are looking forward. Sadly, our crystal ball can only see ahead to December 2010.

Image Source: The Wall Street Journal, which offers an interactive version of the chart!

Update 18 May 2010, 11:19 AM EDT: We should note that Barry is primarily considering the change in investor psychology as documented in the pages of the Wall Street Journal between 2007 and 2010, with the 1987 crash thrown in to note the parallels between it and the "flash crash". His main thesis is that in 2007, the possibility of something similar to the Black Monday Crash happening again was unthinkable, while today, investor expectations are very different.